A certain disparity in treatment 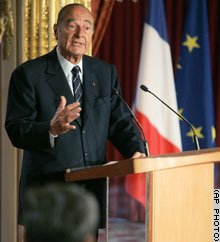 Adding to the long list of issues the British media deigns not to report, we at least have CNN to thank for reporting the latest development on the less than glorious activities of the French Army in the Ivory Coast – the story itself lifted from an AP report.

This stems from a report in October last, when French defence minister Michele Alliot-Marie suspended General Henri Poncet, the officer commanding French "peacekeepers" in May 2005, when an Ivorian man, named as Mahe, died after being shot by French troops. In addition to Poncet, Colonel Eric Burgaud and an unidentified platoon commander had been suspended.

Now, in a New Year address to the Army, Chirac at the Elysee Palace in Paris has said that the killing of Mahe "must spark deep reflection within France's military".

It was the first time Chirac has spoken about the killing but, although he called it a "serious offence", he also described it as "an isolated act”, saying that it "must not tarnish the reputation of the French military." The killing "must nonetheless incite you to reflect more about the deep meaning of the profession of bearing arms," he added.

It would be hard to agree, from accounts of French behaviour in the Ivory Coast, that Mahe's killing was an "isolated act", but it seems, from the fact that Chirac chose to refer to it in his address to the military, that the investigation of General Henri Poncet for "complicity to murder" has shaken the French military at the highest levels.

Once again, though, we cannot help but remark on the disparity in the treatment of this incident, compared with the media obsession with American activities in Iraq. Can anyone imagine that, if an American general had been suspended for "complicity to murder" of an Iraqi citizen, and the issue had been mentioned by Bush in his own New Year address, that the story would have been confined to a shot slot on CNN?

Speaking of unreported stories, incidentally, Claudia Roset has come up with a major new development in the oil-for-food scandal, over at National Review.