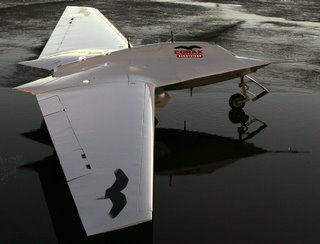 Just over a week ago, the aviation world was intrigued to see recently released photographs of an unmanned aerial vehicle (UAV) built by BAE Systems, known as the Corax. Observers noted the resemblance to a cancelled US military reconnaissance UAV, while Defense Tech hinted that it could be associated with the joint UK/American venture code-named "Project Churchill", an effort focused on the joint, airborne command and control of the UCAV.

A report in Janes International Defence Review had already identified this "little-discussed effort" – described as "the UK's long-running and highly classified work into UCAVs and home-grown stealth technology". This, apparently, is still continuing, despite the MoD having cancelled the joint UK/US Future Offensive Air System (FOAS) programme, which included UCAV development.

Following that cancellation and the recent Defence Industry Strategy Review, when defence secretary John Reid announced that the UK had no plans to develop any further manned aircraft after the current generation, we have speculated on this blog that the UK was poised to join the French-led Neuron programme, being carried out entirely separately from the US projects.

So far, no announcement has been forthcoming but, late last week, the UK took a step into the French camp with the announcement that France and the United Kingdom were jointly to examine lightweight radar technology for use on small platforms such as UAVs, under the aegis of the European Defence Agency (EDA).

UAV reconnaissance has been collectively identified by EU nations as a key technology to develop in support of the European Rapid Reaction Force and their development remains one of the EDA's top priorities. The EDA already has issued the first of two small technology study contracts, in this case for line-of-sight and beyond-line-of-sight data links on long-endurance UAVs.

The Anglo-French project now appears to put the UK firmly in both the French and the US camps. Given the American sensitivity to technology transfer and the suspicions about technology leakage, and the fact that the French are technology partners with the Russians in the development of UCAVs, it remains to be seen whether the British position is sustainable.

Riding two horses, as any cowboy will tell you, can be an uncomfortable – if not dangerous – experience.