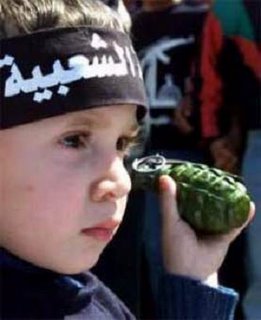 This posting will have not guns in it. Not directly, anyway. Some of the people it is about have guns but I am not writing about guns. Not big guns or small guns; not rifles or shotguns. Got that? No blinking guns.

So, having got that off my chest, let me turn to the subject of the posting: the EU foreign ministers. As we reported earlier they were due to discuss a common position vis-á-vis the new(ish) situation in the Middle East.

Then again, I have also expressed the view that a Palestinian Authority led by Hamas will not be all that different from the self-same authority being led by Fatah. If anything, this is easier to deal with as there can be no doubts about the organization’s intentions.

It seems that this is not crystal clear to everybody. How else are we to understand the curious phraseology of the EU foreign ministers. Or, to be precise, how are we to interpret the phraseology, as reported by the BBC World Service: “EU 'to keep funding Palestinians'”.

The story was summed up in the first paragraph:

“The European Union says it will continue funding the Palestinian Authority so long as its new government is committed to peace with Israel.”

The thing is, the new government will have Hamas in the majority, and the latter has never been committed to peace with Israel. How can there be a “so long as its new government is committed”?

Deutsche Welle puts it slightly differently. According to this, Javier Solana has stated that Hamas must change its attitude:

“They have been a terrorist organization. They have to change their methods and they have to accept that violence is incompatible with democracy. They have to also recognize Israel, because in the end what we are trying to do is construct a two-state model and to do that, you have to talk to the other.”

I suppose that does not say that money will not be forthcoming unless Hamas changes but there is the problem of it being listed as a terrorist organization.

Secretary of State Rice has made it clear that the American government expected the European ones to stay on side as far as Hamas was concerned and not go around handing out large sums of money while terrorism was openly glorified and Israel’s right to exist was not recognized.

“Supporting a peace process on the one hand... and on the other hand, supporting the activities of a partner in that set of negotiations which does not recognize the existence of the other partner, it just does not work.”

Meanwhile Angela Merkel, speaking at a joint press conference with Mahmoud Abbas, said quite firmly, that Germany would not support and, presumably, not give any money to an organization that would not renounce violence and refused to recognize another country’s right to exist.

Mahmoud Abbas, on the other hand, has called upon the donors to continue giving money, to ensure that the PA could continue to function and run the Palestinian territories. Since the PA was not all that successful in doing that before this election, that particular call does not seem to be rooted in anything except sheer panic.

A separate story on the BBC website tells us that the talks between the EU3 and Iran have once again ended “without progress” as nothing new was said by the Iranian negotiators. An impasse seems to have been reached on every front.