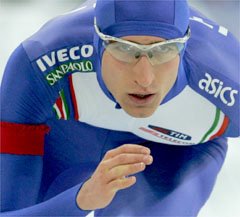 This is based on a syndicated Associated Press report on the results of the European Speedskating Championships, datelined Hamar, Norway. Apparently, or so we are told, Enrico Fabris became the first Italian to win a men's title, finishing ahead of two Norwegians.

Actually, I don’t know who Fabris is, I didn’t know there was a European Speedskating Championship going on and frankly – I am sorry to say - care less. But what intrigued me about the report was its headline, repeated in many of the other papers, which refers to: "EU men's speedskating title".

The reason, of course, is that we wish the European Union to be seen for what it is, our central government – a political construct and not a continent – giving it more visibility, rather than hiding it behind "Europe". But if agency hacks are now describing Europe as the "European Union", we are into a whole new ball-game.

But, if all the bad news currently attributed to "Europe" is now laid at the door of the European Union – even when it applies to countries outside the EU - we could be onto a winner. The "colleagues" will have to start explaining that the European Union is not Europe, something we are always having to do.

Incidentally, one US site refers to Europeans as "Yurps". As Queen Victoria never said: "We are amused".