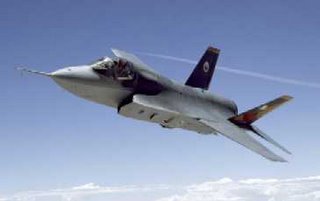 In a deal which has, in my view, spelled the end of the joint UK-US Joint Strike Fighter venture, defence secretary John Reid and his French counterpart Michèle Alliot-Marie came to an unexpected agreement yesterday on cost sharing for the design of their proposed aircraft carriers.

The French have agreed to pay Britain as much as £140m to develop and construct an aircraft carrier based on the design of those being built for the Royal Navy.

Flagged up on the blog two weeks ago, even until late last week, the talks on design co-operation – which had been proceeding in fits and starts for three years – seemed to have stalled, with French negotiators offering half the £100 million-plus the British had been asking, 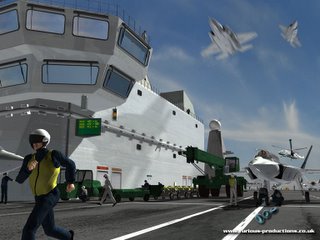 Sir Peter Spencer, the Defence Procurement Agency chief, and his French counterpart, Francois Lureau, had met in France on 13 January but had failed to make much progress on the subject. A French government official observed that the talks over the "economic conditions" for co-operation were "difficult".

He argued that the French too were bringing something to the table, their more recent experience of building a large carrier but there was a lack of agreement on the valuation of that knowledge. He complained that they (the British) "think the Charles de Gaulle doesn't exist."

Then, on 17 January, Executive Chairman Jean-Marie Poimboeuf of the French ship-builder DCN warned: "The discussions are numerous and difficult", saying that there was no "plan B" if London and Paris failed to come to an agreement.

Thus, although Reid's meeting with Alliot-Marie today had been planned for some time, with such entrenched positions, there was no sign of an imminent breakthrough. Some commentators were even suggesting that the deadlock would have to be broken by direct, bi-lateral talks between Blair and Chirac.

Yet, not only do the French appear to have "caved in" over the British asking price – paying double what they had been prepared to accept only a week ago - they have agreed to put in another £40m towards the development of the carrier, which remains in the final stages of the detailed design work needed before construction can begin.

So surprising was the agreement that, according to the Financial Times, the people involved in Tuesday's meeting emerged "surprised and giddy". "We did not expect such a fruitful result," said one French official. Both sides said the final talks were also unusual in that both Reid and Alliot-Marie were personally involved in detailed and sometimes heated negotiations.

The Financial Times also reports that, for the French, the deal allows them to jump approximately two years ahead in their efforts to build a partner ship to the Charles de Gaulle. Their programme, codenamed Project Juliette - developed by DCN - is far less advanced than the Royal Navy design drawn up by Paris-based Thales and BAE Systems. 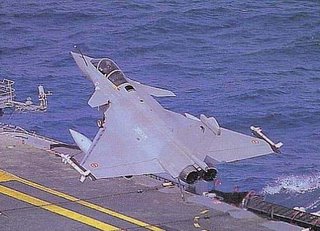 The first £30m French payment for the Royal Navy design is expected to come when the deal is officially signed, which Alliot-Marie said could be in a few weeks. A second £25m payment would be mandated for July, but the final £45m year-end payment is to be conditional on France making a final decision to pursue a joint programme.

The additional £40m payment will cover about one-third of the development work common to the two UK carriers and the additional French ship, which Britain estimated at £115m.

However, fairy-tale endings like this do not happen in real life. They are generally only found in er… fairy tales – especially when the French are the negotiating partners. There is a very strong smell of a side-deal which has not been disclosed.

The sudden agreement might not be unconnected with the announcement on 15 December by the French defence group Thales – which is a design partner for the British carriers - and the state-owned naval shipyards DCN. They are to go into partnership, signing a shareholding alliance paving the way for Thales to take a 25 percent stake in DCN, with DCN buying the naval shipyard activities owned by Thales in France.

But the crucial explanation lies in what we flagged up on 6 January - the extraordinary tale of the second engine for the Joint Strike Fighter. This story got more mysterious last week with the highly suspicious leak of the news that Bush has apparently rejected Blair’s pleas that the programme should be rescued.

This "snub", we suggested, would set Blair up with just the excuse he needed to call of the whole JSF co-operation programme, in time for the British to avoid having to make a firm order for the aircraft, due in November.

The only practical alternative, of course, is the French-built Dassault Aviation Rafale (above left, and right), which is to equip the French carrier. It makes absolute sense for Britain and France, having now agreed to co-operate with their carrier designs, to operate the same aircraft.

As another straw in the wind, on 16 January the French government announced that it was to buy only 51 of the latest-model Rafales – which have yet to win a single export order - rather than the 59 stipulated in the original contract. Curiously, the value of the deal was to remain at €3.1 billion, the addition finance being used to upgrade systems and avionics to make the aircraft "more suitable for export". And to whom are the French so confident of selling the aircraft?

Short of having an MoD press release in my hands to that effect, I am now as convinced as I can be that the British government is going to dump the Joint Strike Fighter and buy French, with implications for the Atlantic Alliance that I hardly need spell out.