They are going to meet 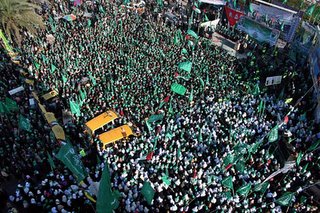 Tomorrow the EU foreign ministers will foregather in Brussels to discuss what the common line on Hamas should be in political and, above all, financial terms. Going on past experience, a common position is going to be next to impossible to work out.

So far, the European governments have been insistent that they will not deal with Hamas unless it renounces violence and recognizes Israel’s right to exist. Germany has been particularly adamant on the subject and Angela Merkel, who is about to visit the Palestinian territories (well, does she ever stay at home?) has said that she will not meet the Hamas leadership.

So far, we have heard nothing from the Great Panjandrum, Javier Solana or, for that matter, l’escroc Chirac. Whatever happened to the French policy in the Middle East?

There are problems ahead. According to Deutsche Welle

“EU diplomats say time is of the essence, and the Europeans should watch how government building progresses and how the politics of Hamas develops.

If Hamas swears off violence and acknowledges Israel's right to exist, that would be a step in the right direction and a signal that the EU can continue channeling extensive financial aid to the Palestinian Authority without worry. But the ministers have not gone quite so far as to draft concrete demands for the Hamas or to threaten with financial consequences.”

So what are they going to do?

“Last year the EU headquarters in Brussels handed out some 280 million euros to the Palestinians. Combined with bilateral aid from the 25 EU members, the sum came to over a half a billion euros ($612 million). The EU is the single largest financial backer for the Palestinians, and stopping the flow of much-needed cash could seriously put a dent in Hamas's activities.

On Thursday, the European Union pledged continued support for the Palestinian economy even after Hamas won the legislative elections. So far no strings have been attached to this offer, but the 25-nation bloc has warned that the new government must be committed to peaceful relations with Israel.”

It is, as we know, not the Palestinians who received all that lovely moolah but the Palestinian Authority and a good deal of it disappeared, ne’er to be seen again. That, at least in part, is the reason for the Hamas victory.

It would appear that the EU wants to go on pouring money into the Palestinian Authority, no matter who runs it and where the money is going to but needs to find a way to get round those pesky rules about terrorists (and the general shock at the Hamas victory).

There is, of course, former President Carter’s suggestion of channelling it through the UN, thus by-passing the legal problem. This has the merit of ensuring that a good deal of the money gets stolen before it ever gets to Hamas.

Meanwhile, Hamas is assuring all and sundry that they will not put up with financial pressure but will look for money elsewhere, that is the Arab world. This may turn out to be more difficult than they imagine. Some Arab governments will pay what will amount to hush money – here it is and leave us alone – but others are not that keen on encouraging another terrorist organization.

There is Iran, of course, but there are limits to its capacity for supporting outside causes. There is Hizbollah as well. Also, Hamas tend to be Sunnis and Iranians Shi’ites. That does not preclude deals but makes life a little difficult. But, above all, there are economic problems in the country itself. Unemployment runs at 25 per cent, there is serious discontent in various parts and bombs appear to go off in places where the President is expected to appear.

Still, judging by the cautious reporting, the new Hamas-led PA might not have to look to Arab countries for finances. What’s wrong with the EU? Why break the habit of a lifetime?