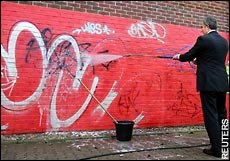 There is hope for us yet. Despite the saturation coverage given to the prime minister's "respect" agenda, at least The Daily Telegraph devoted its leader to the events in Iran, declaring that “The West must call Russia's bluff on Iran”. However, even in a relatively robust piece, it shows no sign of appreciating quite how serious the situation really is.

But it is yet another measure of how infantile the media and politicians have become that the bulk of coverage (including the BBC lead last night, on all news channels) was devoted to the "respect" agenda. Once more, one has to observe that, if the élites are expending their energies on such trivia, it is hardly surprising if the population in general is turning away from politics with a stifled yawn.

It is not that yobbery and the general break-down in law and order on our streets are not important. The dismissal relates to the prime minister's approach to the issue, trivialising something which needs to be treated very seriously, and approached in a grown-up manner.

That is certainly the view taken by the Daily Mail, which headlined its leader: "Respect? This only deserves contempt", declaring:

With stunts and soundbites, photo opportunities galore, eye-catching initiatives and Ministers in full cry, New Labour proclaims its doctrine of 'respect' across the land. And yet again the public can only wonder at the glaring contrast between rhetoric and reality.

The Mail website also invited comments and one anonymous correspondent from Macclesfield added his views, which will strike a chord with many of our readers:

The reason that yobs rule many of our streets and respect has gone is because they hardly never get punished. It somebody assaults someone else they should be put in prison. This will deter them and their friends in the future. When I was assaulted I went to the Police station to report it. The Police told me they were too busy to deal with it, even though I knew who had assaulted me and where they were. This is not an isolated case. It happens all the time. Keeping crime figures down is the governments top priority not fighting crime.

The Police are just like the Inland Revenue. They gather tax. Crimes that pay fines, such as speeding are the most important to them as they gather revenue. That's what all this about. Money.

I was even moved yesterday, to add my own views to the Telegraph site, in the following terms:

In my experience, one of the most egregious examples of the lack of "respect" can be found in the courts service. Correspondence from the courts - specifically fine notifications but also general correspondence - is invariably addressed with the first and last names, but no title (Mr, Mrs. etc). There seems to be a view taken that, because the respondent has fallen foul of some administrative diktat (like parking in the wrong place) that automatically disqualifies them from being treated with the normal courtesies.

The attitude seems to carry over into the courts themselves. Some time ago, I did jury service, where the judge is "my lord" this, and "my lord" that, and the barristers are "my learned friend". Yet, when I reported for duty, the usher, without a blush, checked me off her list (and all the others) by my first name.

Furthermore, the police are just as bad. I had dealings with a police sergeant who, although he full well knew my title, having it written down in front of him, insisted on calling me "Mr" (I am a PhD). When I called him "constable", though - in retaliation - he was mightily offended. Basically, if those in authority treat us all with such lack of courtesy (or even contempt), they can hardly be surprised if we reciprocate.

For sure, these are but small examples, but the point is that "respect" starts at the top. Whether it is the prime minister's blatant disregard for public sentiment in caving in on the British rebate to the EU budget, the EU itself in seeking to ignore the verdict of the French and Dutch public in rejecting the constitution, or a host of other issues too numerous to list, the general feeling is that the ruling élites have nothing but contempt for us all. It even trickles down to the dismissal of the growing band of people with strongly-held views on "Europe" as "Europhobes" or "little Englanders".

It is that which, I believe, is at the heart of the issue. As with respect, contempt cuts both way. Our population may be divided in its politics and aspirations, but we are united in one thing – our universal contempt for our rulers. And if we have contempt for them, that soon extends to embrace their laws as well. This may manifest itself in different ways, at different levels of society, but the malaise is the same. That, the prime minister will not be able to wash away with a pressure-jet cleaner.