This is where our money goes 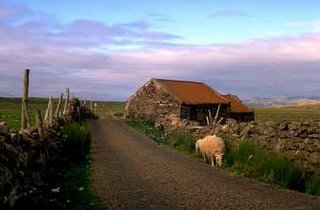 From the Scottish edition of The Sunday Times comes a story of a type where you can only stand back and say, "you couldn’t make it up".

And you most certainly could not, as it concerns the expenditure of our money recycled through Brussels and dolled as part of the European Regional Development Fund out to a tiny Scottish community in the picturesque Coigach peninsula in Western Scotland.

The story is written by Reiner Luykens, a German journalist who lives in Coigach, who starts by reminding us that, six years ago, a cartoon in The Sunday Times depicted the residents of the remote community looking to the skies in wonder. It was raining banknotes.

The story alongside reported how 240 souls who live in five villages strung along a single-track road had been drowned in European money. It poked fun at a huge new community hall, an "aircraft hangar with pitched roof", which had been provided for the place.

This tiny community, continues Luykens, came to mind last week when Tony Blair’s spin doctors launched an all-out effort to depict Britain’s presidency of the EU as a complete success. The UK, they argued, had insisted that European funds have to be spent efficiently and only with good reason. Which rather implied that this was always the case in Britain, a country that receives just under £1 billion in aid from the European Regional Development Fund (ERDF).

I can do no better than republish verbatim, what he then writes:

Coigach shows Britain in a rather different light. Highlands and Islands Enterprise (HIE) which acts as a conduit for European monies in the region, presents this spot as a prime example of a fragile community threatened by depopulation and economic decline and so in in real need of financial aid.

The community hall was just the start of it. Five years ago, Davy Garrett had the idea to turn another, redundant hall into a piping school. He put together a business plan that foresaw 120 students in the first year of operation, drawn from all over the world for week-long courses. Each course would be priced at £300, creating a turnover of £36,000, a figure that was meant to double in the following years. Five jobs were to be created. HIE was enthusiastic and agreed to provide, together with the ERDF, most of the money. 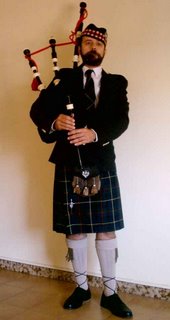 One year and £125,000 later the Highland cultural establishment appeared for the opening ceremony. Nobody seemed to have had any doubts about the school's success — apart from a few who happen to know the piping scene well. There are already two highly reputed facilities in Glasgow — the National Piping Centre and the College of Piping — competing for students.

During the first year, 11 pipers turned up, most for just one or two hours’ tuition. The turnover reached £570. The second year was more promising: 79 students showed up. A delegation of the ERDF visited the facility and wrote a largely positive report. In 2004 however, student numbers dropped to 33. Last year's turnover was just £3,300.

Garrett has to put up with a lot of mockery in the village. Economically, though, his failure doesn’t really affect the place. Coigach is anything but a fragile community. The population is younger than the Highland average and grew by more than 3% between 1991 and 2001. Unemployment is low, car ownership is high, house prices have risen sharply. An overnight stay in the local hotel (whose restaurant has a Michelin star) costs nearly £100.

In 2003 HIE lavished more money over Coigach, this time for broadband internet access via a wireless satellite-fed connection. HIE and the ERDF launched a company, Hi-Wide, to supply at first five communities, Coigach among them, and later 50 areas with the technology in a £2.6m scheme.

It was unfortunate that BT announced just two months later that virtually every house would soon be able to receive broadband for the usual subscription fees. Hi-Wide adjusted some of their plans accordingly, but this did not stop the subsidy machinery: a first instalment of £800,000 had been approved and that was that. Hi-Wide hired subcontractors to carry out the work.

But at the northern end of Coigach, some houses fitted with the new technology didn’t benefit. The signals got lost in the hilly terrain. Meanwhile, broadband has reached the peninsula via the telephone — and it works.

British critics have been quick to criticise the grand scale of EU waste: the Italians who abused the common agricultural policy with fraudulent claims for the number of olive trees they grew; the Austrian farmers who inflated the size of their pastures eligible for subsidy by 60 percent; the £670m lavished on the Brussels parliament itself. But where do you look for our much-vaunted financial good sense for a point of comparison? Not in sleepy Coigach, that's for sure.

The next time you get a Euroluvvy tell you how well Scotland does out of the ERDF, and how necessary it is for its development, jobs and everything, just show them this posting.