All change at the State Department 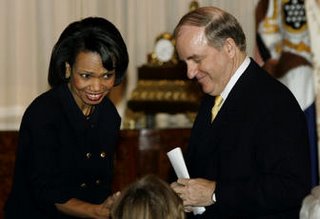 Say what you like about Alec Russell, the Daily Telegraph’s Washington correspondent but he does seem to read the newspapers. The story he is trumpeting in today’s paper is actually yesterday’s. Based on a speech made by Secretary of State Condoleezza Rice on Wednesday, the story of the big change in the State Department was covered yesterday in all the American newspapers, among them (to pick two at different ends of the political spectrum) the Washington Times and the New York Times.

Oh well, even Mr Russell gets there eventually, though he finds it impossible to report a major and internationally significant policy announcement without having a giggling little Bush-bashing:

“In a shake-up of United States diplomacy Condoleezza Rice is to transfer hundreds of diplomats from Europe and Washington to postings in the Middle East, Asia and Africa. A third of America's 6,400 diplomats could ultimately be redeployed, officials said.

The secretary of state, reflecting Washington's concern over its appalling image in the world, also called on diplomats to get out of their embassies, and for the creation of one-man outposts away from capitals.”

Holding the fort on the Washington European cocktail circuits and chumming up with European officials, that’s what.

“Miss Rice noted that America had almost as many state department staff in Germany, with its population of 82 million, as in India with one billion people.”

As it happens, America’s image in India is far from “appalling”. Relationship between the two countries is growing warmer by the day and even those famous opinion polls tend to show Indians to be largely pro-American.

The Telegraph editorial is much closer to the mark.

“In his second inaugural address, President George W Bush defined the ultimate goal of American policy as "ending tyranny in our world". His Secretary of State calls the instrument through which this is to be achieved "transformational diplomacy". She has now detailed how it will operate.

At Georgetown University on Tuesday, Condoleezza Rice spoke of shifting several hundred diplomats from Europe and the United States over the next few years to countries such as Brazil, China, Egypt, India, Morocco, Indonesia, Lebanon, Nigeria and Pakistan. The American presence will be more widely spread through "presence posts", consisting of one diplomat, and "virtual presence posts", comprising an internet site.”

“This is where the action is today, and this is where we must be. To reach citizens in bustling new population centers, we cannot always build new consulates beyond a nation's capital.”

During her inauguration hearing last year she had referred to her intention to introduce “transformational diplomacy” and reminded her hearers about America’s work in turning Germany and Japan into democratic allies.

Of course, when it comes to countries like India, the question is not one of turning them into democracies or allies – India is already both. There is a recognition of that vast sub-continent’s growing importance …. and of the waning importance of Europe.

The Telegraph leader, unlike its reporter, notes the need to change State Department attitudes to their work:

“Miss Rice promises a shake-up of American diplomacy similar to that which followed the end of the Second World War and the Cold War. But it will not be fulfilled without a fundamental change in the attitude of her civil servants. For far too long they have failed to sell the policies of the administration that employs them to the countries where they are posted. In comparison with
other bureaucracies, the embassies are passive and the State Department inaccessible.”

It is, alas, a little worse than that. Just as the CIA, State seems to have decided to be a political player separately and, indeed, in opposition to the administration. I was amused during a previous trip to Washington when somebody explained to me that the State Department did not see its role as having to explain American policy to others but as having to explain to Americans why they are disliked by others. This, too, will have to change. Secretary Rice’s message is “Go out and sell your country.”

There is one aspect to it (as I noted above) that is not being mentioned by the MSM either here or in America. The diplomats to be sent all over the world will not be vacating the cocktail parties of Washington solely – they are being removed from the capitals of Europe.

If there is one part of the world where America has an “appalling” image, it is western Europe and precious little have the armies of American diplomats done about it. Probably fanned the flames.

This does not seem to matter to Secretary Rice and the reason is clear to see. As we have mentioned on this blog once or twice before, American eyes are turning away from Europe. I saw direct evidence of this when I was there recently.

American newspapers have many pages of foreign news but these tend to be from the Middle East and the Far East or Latin America. Only rarely was there anything from Europe (including Britain). And if there is anything, it is likely to be from Eastern Europe.

This is, of course, a recognition of political reality. Europe, tangled up in its petty little squabbles and mulishly determined to push through various integrationist measures, has become an ever diminishing force in the world (whether Chirac threatens nuclear strikes or not).

On the other hand, as we have also written on this blog, with the EU defining its position in opposition to the United States, the existence, growth and structure of that body should be of importance to America and its government. Unfortunately, it seems the thousands of State Department officials who have spent such a pleasant time in the European capitals in the last few decades, do not seem to have been able to explain any of it. They may as well go and learn new tricks. If they can.