The limits of Euroscepticism 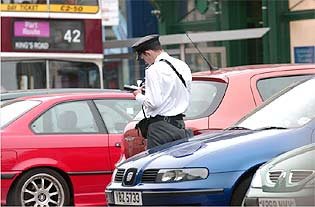 This morning, I took a call from Neil Herron, the doughty Metric Martyrs campaigner who has since reinvented himself as a battler against the increasingly draconian local authority parking schemes that are causing so much grief to ordinary people.

Neil had just walked out of the magistrates' court in Newcastle, having been convicted of failure to pay an excess charge in a Newcastle corporation "pay and display" car park, despite the admission by the corporation that the signage had been incorrect and, therefore, that the charge was invalid. (He will be posting the details of the case on his own blog later today.)

This is one of a number of cases, where ordinary people who are confronted with "the system" are progressively coming to the realisation that the odds are so stacked against them that, irrespective of the justice of their case or the arguments they present, they are into a "lose-lose" situation.

Turn now to the front page of the Daily Telegraph, which headlines: “Thieves no longer have to appear in court”. This is a speculative piece by Rachel Sylvester, based on as yet unpublished plans by ZaNu-Labour, where Tony Blair is "planning a revolution in the legal system that would mean up to a million petty criminals a year being dealt with by prosecutors and the police without ever going to court."

My spontaneous response when I say the headline in the paper shop was to remark that you still had to go to court if you did not pay your Council Tax, to which the shopgirl replied, "as you know from personal experience".

Actually, the obscenity of that is that, when you present yourself to the Magistrate, he has no discretion – unlike when dealing with a local burglar or thug, when he has an array of sentencing options. If you refuse to pay your tax, he has no option. He has to send you to jail. I argued that the court system could save a great deal of money by converting a "speak your weight" machine into a "go to jail" machine. You put your ID card into the slot and it sentences you there and then. Perhaps, even, they could have portable machines in police cars.

Now, compare and contrast this with my piece on Sunday, about plans to give Europol additional powers (which, incidentally, has still not been carried by any British newspaper – although a brief report was carried by the Turkish Anadolu News Agency).

Before indulging in my favourite hobby of railing against the inadequacies of the MSM, however, even I have to concede that the plans for Europol are small beer compared with Blair's plans to turn over a large part of our justice system to the officials and dispense with magistrates – even if they are often useless.

Similarly, although one can rail against the huge amounts of money dolled out to the European Union, the actual amount is minute, in comparison to the huge amount that Gordon Brown now takes off us in tax, giving us – as The Business reported yesterday - a higher taxation level than the much-derided Germany.

And what price complaints against the EU for its waste of money when the same paper also reports that, over the past 12 months alone, Brown has flushed tens of billions of pounds down the drain in useless or wasteful spending?

That story that is re-iterated in today’s Telegraph which majors on a £225,000 scheme advising the elderly on how to wear slippers. By contrast, even with stories like this, the EU begins to look like a model of rectitude.

And what chance is there of getting the population worked up about EU "fraud" when, as some Europhiles rightly claim, the amount of benefit fraud in the UK – as instanced by this story in today's Telegraph - far exceeds the amount lost in the EU system and, like the EU, the Department of Work and Pensions cannot sign off its own accounts.

Therein lie the limits of Euroscepticism or, to be more specific, an illustration of the difficulties of getting people worked up about the European agenda. There is a general feeling that the whole system of government is corrupt and out of control, and the EU is but just one small part of that. Worse still, so egregious are the failings of the UK government that the peccadilloes of the EU pale into insignificance.

This situation presents the gravest challenge for Eurosceptics: how to motivate a population and political system – already naturally predisposed to give the domestic agenda more attention than supposedly "foreign affairs" – to the iniquities of the EU, when there is so much wrong at home.

Pondering on this, perhaps the way forward is to refocus on some essential truths. Firstly, the EU is not - as some Eurosceptics would aver – the root of all our troubles. Secondly, leaving the EU will not solve all our problems. Even if we had the whole of our EU contributions to add to Gordon Brown’s treasury, there is absolutely no guarantee that he would not waste those billions in exactly the same way he is already wasting many more.

At best, therefore, our membership of the EU can only be seen as one part of a bigger malaise – one symptom of the disease rather than the disease itself. How that translates, though, into practical politics, is going to take some working out.