Not so brave after all 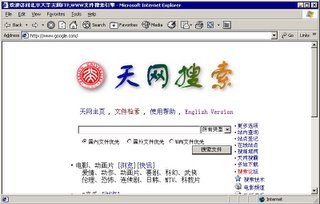 Having recently garnered applause from all over the world for their stand against the American government or the State Department (two separate entities), Google has decided “that’s enough bravery for one year”.

As AP reported yesterday, Google has agreed to all the Chinese government’s demands in return for better access and, no doubt, large amounts of moolah. What would have happened if the State Department had thought of that as a weapon?

Then again, as even the BBC’s Justin Webb agrees, it is always easier to deal with (and, indeed, criticize) democratic governments.

“To obtain the Chinese license, Google agreed to omit Web content that the country's government finds objectionable. Google will base its censorship decisons on guidance provided by Chinese government officials.

Although China has loosened some of its controls in recent years, some topics, such as Taiwan's independence and 1989's Tiananmen Square massacre, remain forbidden subjects.

Google officials characterized the censorship concessions in China as an excruciating decision for a company that adopted "don't be evil" as a motto. But management believes it's a worthwhile sacrifice.”

Michelle Malkin has suggested a new logo for Google.

“We firmly believe, with our culture of innovation, Google can make meaningful and positive contributions to the already impressive pace of development in China.”

For the moment Google’s service will be limited to searching webpages and images.

“Neither Google's e-mail nor blogging services will be offered in China because the company doesn't want to risk being ordered by the government to turn over anyone's personal information. The e-mail service, called Gmail, creates a huge database of users' messages and makes them instantly searchable. The blogging services contain a wide range of personal background.”

Having been successful once, the Chinese government will know what to do next time.