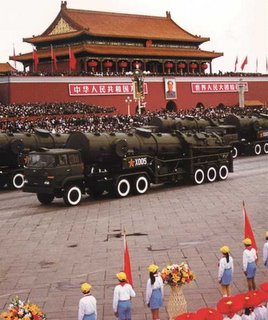 With tensions rising over the potential nuclear threat from Iran, and the known complicity of China in supplying arms and nuclear technology to the Mad Mullahs, what would you do if you were prime minister of Greece, a member of that sterling (if I may use that word), peace-loving organisation called the European Union?

One thing you might not think of doing is to pop over to Beijing and tell the Chinese premier that the EU arms embargo against China should be lifted, and that Greece will continue making efforts to this end.

But then, Mr Costas Karamanlis has more imagination than you or I, which is probably why he is prime minister of Greece. And, according to the Chinese press agency Xinhuanet, that is precisely what he did yesterday, making this "reaffirmation" in a China-Greece joint statement signed also by Chinese premier Wen Jiabao.

Greece, said our imaginative prime minister, "would continue making efforts within the European Union for the early lifting of the arms embargo against China, taking into account the China-EU all-round strategic partnership and relevant conclusions of the EU summit".

However, EU leaders seemed to have reaffirmed their political will during the September EU summit "to work towards ending the ban". That's something I missed. Does Mr Blair know?

Anyway, China now "demands" that the European Union observe its political commitment and lifts the arms embargo against China as soon as possible, "so as to remove the last obstacle to China-EU relations". And, of course, Mr Costas Karamanlis is only too happy to oblige.