Think of an advertising slogan 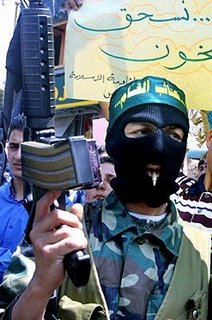 According to a report on the Guardian website, Hamas has had a change of heart. Well, no, since you ask, they are not going to stop blowing up themselves and numerous other people (did somebody say indiscriminate bombing?). What they are going to do is try and put a good image on it.

To this end they have hired a spin doctor a.k.a. a media consultant, Nashat Aqtash, and are paying him $180,000 (£100,000). One would quite like to know where the money comes from but I suppose one is not going to get an answer. Certainly Mr Aqtash is not asking any questions. PR people don’t. They just charge.

One must admit Mr Aqtash faces a daunting task. The way Chris McGeal puts it is that he has been hired

“to persuade Europeans and Americans that it is not a group of religious fanatics who relish suicide bombings and hate Jews.”

I guess you could try to explain that they do not really relish doing these things. Mr Aqtash’s main problem is Hamas itself. Most of its leaders and even ordinary members keep saying that they relish suicide bombings and hate Jews. He has to persuade them to stop dancing in the streets every time they hear of another explosion.

Mr Aqtash, who also teaches media at Birzeit university in Ramallah (would it not be interesting to have a look at the materials he is using for his course?) says:

“Hamas has an image problem. The Israelis were able to create a very bad image of the Palestinians in general and particularly Muslims and Hamas. My contract is to project the right image. We don't need the international community to accept Hamas ideology, we need it to accept the facts on the ground. We are not killing people because we love to kill. People view Hamas as loving sending people to die. We don't love death, we like life.”

The trouble is that it is precisely what they have been saying ever since their foundation and it is that “peace-loving” sentiment that is in their foundation document. Then there is the undeniable fact that Hamas is responsible for hundreds of deaths and serious injuries, all of them civilians and many of them children. Actually, they have never bothered to deny it.

However, it looks like they will emerge from next week’s elections as a formidable political force in Palestine and there is a need to gain acceptance internationally. Hence the spin doctor, who will go around telling the world and, in the first place, former President Carter and former Swedish Prime Minister Carl Bildt, that actually Hamas are cuddly little bunnies who bite only when they are cornered. And not even then. In fact, they prefer the Gandhi method. Those two might even believe it but a certain amount of scepticism is bound to be the reaction of the international community.

Some of the Hamas people are listening to their spin doctor. Muhammad Abu Tir, who is second on the election list and who has been told not to colour his beard red with henna, because it looks ridiculous, has said in a recent interview twice that he was not a Jew-hater. Chris McGeal does not reveal whether Abu Tir also informed the interviewer that some of his best friends were Jews.

So here they are, those

Mr Aqbash’s campaign will be worth watching.