Will the real Barroso please stand up (reprise) 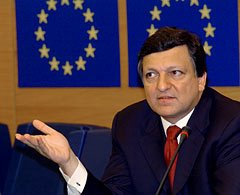 I expect some of our readers can recall those heady days when the new Commission led by Señhor Barroso was described happily by British and American commentators and less happily by some French ones as being “free-market”.

This blog pointed out at the time (repeatedly) that there was no particular evidence for this and Commission President Barroso’s immediate demands for the increase of the EU budget in order to finance huge Europe-wide projects (along the lines of the old “Asian mode of production”) indicated otherwise.

In the same way, we remain sceptical of the free-market credentials of the new members in Eastern Europe while they hold out begging bowls and whinge at budget meetings about the unfairness of it all. (Except that, given the promises they were given and, more to the point, had to make to their own people in order to get them to vote the “right” way, there is a sense of unfairness around.)

Some people, I am delighted to say, still believe that canard about Barroso and the free-market. Really, politics is a very dirty game these days. Why a man should be persecuted for nothing more than a possible mild flirtation I cannot imagine.

The people who believe the stories told about the upright statist Commission President are members of the French Assembly. On Tuesday the man was booed and heckled when he was speaking to the august body.

The French politicians accused him and his Commission colleagues of favouring free markets “at the expense of social protections”.

Barroso defended himself as best he could:

“There has been a caricature of my commission and of me from the very start.”

Meaning, presumably, that this is not true.

One particularly vociferous critic was the Communist Alain Bocquet, who told Barroso that this was not “the European dream our fellow citizens aspire to”. Since his fellow citizens were rarely asked and when asked voted ambiguously at best and negatively at worst, it is hard to tell how he knew. He also informed Barroso that the Constitution was dead, again not something Bocquet is going to be making any decisions about.

Curiously, in his demands for stronger social protections, Bocquet said that 15 per cent of the 450 million Europeans lived in poverty. This may or may not be accurate but most of that poverty is among the East Europeans, whose needs will not be addressed while the French get the screaming abdabs every time there is a suggestion of regulations being lifted and taxation being lowered in order to give the people of Eastern Europe a chance for jobs.

Barrroso did try to come back. He told the deputies that he believed in the Constitution and its principles but acknowledged that he had a long battle on his hands.

He also said to Comrade Bocquet:

“To maintain the European model and values we must have the courage to modernize our policies, reform our economies. Permit me to tell you, Mr. Deputy, that it is not with speeches against businesses that you will create more jobs and growth.”

Fair enough but what was the Commission President proposing? Speeches, it seems, though not necessarily against business:

“The choice of opening up to the world is a winning choice for France and Europe. In the face of globalization, only the European dimension can make the difference and allow us to control the process.”

So we are no nearer to understanding what will save French and European economies or what Señhor Barroso’s real views are.