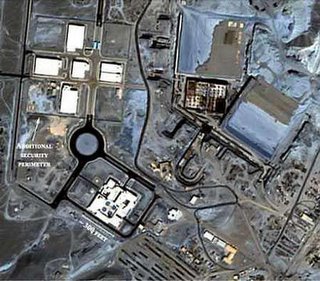 It was in February 2003 that Iran revealed its uranium enrichment programme at Natanz, when it claimed that it was using the technology for peaceful purposes. The US, at the time, did not believe Iranian assurances, alleging that the programme was part of a drive to develop nuclear weapons. As a result, Washington sought to refer the Iranian case to the UN Security Council.

That brought an intervention from the EU, and three countries in the Union, Germany, France and Britain – the so-called troika – opened negotiations with the Iranian government. Then, in November 2004, in a triumphant exercise of what was hailed as "soft power", the EU3 succeeded in getting Tehran to sign a "temporary agreement" to cease uranium enrichment.

We picked this up with a piece on 18 November 2004 but the utter fatuity of this exercise was brought home a couple of weeks later by an writer for Arab News, Amir Taheri, in an article entitled Taking Europe for a Ride. Over a year later, it has kept its freshness and vibrancy and serves as a reminder of the folly of European aspirations. 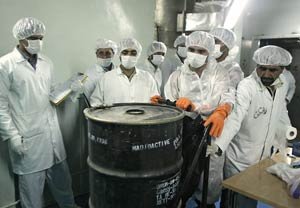 And now, not a month short of three years after the United States sounded the alarm, and after an utter, complete defeat of European negotiations, the Europeans have finally admitted defeat and taken the first steps toward referring Iran to the UN Security Council, after Iranian scientists re-commenced work on uranium enrichment.

So says the online edition of The Times and 2,511 other articles (on Google count) as the media rush to catch up on a story they have shamefully underplayed for those three years.

The EU cave-in follows crisis talks between Jack Straw and his counterparts in Berlin, with straw finally admitting that a diplomatic resolution to the crisis had now reached a deadlock. Without so much as a blush, he says, "It is a matter of very great regret ... Iran has decided to turn its back and these negotiations have reached an impasse". 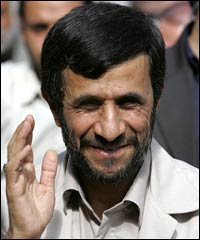 The joint statement accuses Iran of a "documented record of concealment and deception" – now there's a surprise – only to be met with bland denials from Tehran, where president Mahmoud Ahmadinejad has vowed that he would not be intimidated by the "fuss." "Unfortunately, a group of bullies allows itself to deprive nations of their legal and natural rights," he declared. "I tell those superpowers that, with strength and prudence, Iran will pave the way to achieving peaceful nuclear energy."

Meanwhile, the crisis is already casting a shadow on the oil market, with Reuters reporting that prices have climbed a dollar to a three-month high, on fears of supply disruption from Iran – still the world's fourth biggest crude exporter.

Analysts fear that if UN sanctions are imposed, it could slow investment in Iran's ageing oilfields and that Tehran in retaliation might cut off its oil supplies. If Iran halted exports of around 2.4 million barrels per day (bpd), the rest of the world's spare capacity would not be able to make up the shortfall.

Ever quick to exploit a situation, the EU has stepped up its calls for a common energy policy. But, in a taste of battle to come, Reuters tells us that, when the touchy topic of nuclear power entered the discussion, an EU official privately conceded: "It's hard enough to imagine a common policy on energy”. Consensus on nuclear was "for the birds".