The death of ideas 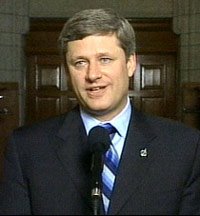 Mark Steyn writes a good piece in the Telegraph today, even if the title tells you all you need to know about it: "Ideas win elections: glamour doesn't".

This is a sideways dig at the Boy King and his policy-free zone, based on Steyn's own observations of the Canadian election campaign. There, against all the apparent odds, "a guy called Stephen Harper", who is "widely agreed by all the experts to have 'negative charisma'", is on course to win.

The reason is, according to Steyn – and I have no reason to doubt him – is that Harper, like Bush and Howard (the Australian version) have the sense of being at ease with themselves and secure in their philosophical moorings. All three know where they want to go and how they're planning to get there. By comparison with their anglosphere cousins, British Tories seem mired in the shallows - and, if Cameron's first utterances as leader are anything to go by, they're happy to gambol there indefinitely.

Glamour ungrounded in ideas is rarely enough, says Steyn. Whereas ideas without glamour seem to do just fine. Indeed, politically speaking, ideas are what's really glamorous. Until the Tories get some glamorous ideas, that's the way it will stay.

For "glamorous", of course, read "good". There is no point having stupid ideas – like the idea of the state running hospitals. Just how crass can you get, supporting a system that gets pots of money, which then finds that treating patients costs extra and has to be discouraged. If the money follows the patient, then hospitals learn that, to make money, you have to treat patients – simple really.

But there is more to it than that. One of the characteristics of contemporary politics is its claustrophobic, stultifyingly narrow scope, focused almost entirely on schools'n'hospitals, plus law and order. Where are the debates and discussions on foreign policy, defence, immigration, transport, the environment, energy, trade and the many other issues that are of vital concern to this nation?

Here, we can point a finger at the European Union, where it has an effect on the whole policy process – the generation of ideas – that is poorly, if at all recognised.

This I identified in the research for a paper on the role of the EU in funding academia, which shed some light on how the commission, with its relatively modest resources – cited as being "tiny, with fewer employees than Leeds City Council" - can produce so much by way of policy documents.

The fact is that the commission out-sources much of its policy work, specifically using funds from the research framework programme (and other sources) to pay academic institutions, consultants, and others, to produce policy ideas. Thus, in the paper - which, unfortunately, we never got round to publishing – I wrote, in the context of the EU using its funds to academia for propaganda purposes:

If propaganda is one result of EU intervention, there is another, negative function, which probably represents the greatest harm done. The outward effect of this damage is the extraordinary policy vacuum at the heart of the body politic, affecting both the government and the opposition where all parties seem to be bereft of any original or imaginative ideas to deal with the manifest problems affecting society.

At first sight, this would appear to have nothing to do with the EU, but that assessment would be wrong. Essentially, policy development, "clear blue thinking", "thinking the unthinkable" and much of the creative work from which stems working policies, arise from or in conjunction with academic institutes. That is very much the case with the EU, where the European Institute and the network of Jean Monnet professors, and other academics, are consulted by the Commission on all matters of high policy. The Commission even runs its own "think tank", called the Forward Studies Unit, staffed in the main by academics. It mode of operation is often to set up "workshops" attended by leading academics, to offer advice.

Therein lies the problem. The brightest minds in politics, in a whole range of policy development areas, and other matters of vital concern to policy-makers, are working directly or indirectly on the "European dimension". The reason for this is quite simple – again it is a question of money. Any researcher wishing to research specific policy issues, whether they affect the environment, food safety, farming, "sustainable development", or even political theory, would find it very had to attract funding unless the work has that “European dimension”. Courtesy of the EU virtual monopoly on research funding, that is the way the system is now structured.

On the other hand, anyone who wished, say, to work up environmental policy issues of strictly national application, the objective of which was to discredit or provide an alternative to EU policy, would simply not get the funding. Furthermore, there would be no point in attempting such a project. Since so many policy areas are now wholly or mainly EU competences, a strictly national approach would have little or no chance of being implemented. No half-way intelligent researcher, with ambitions of seeing their work recognised, would want to indulge in such an activity. It would simply not be a career enhancing move.

By the same token, those few, foolhardy souls who insist on carrying what might be deemed as "anti-EU" research are poorly funded and resourced, lack the critical mass of co-researchers and tend to excluded from "mainstream" (i.e., EU-funded) academic circles. There are no funds for conferences, no subsidised papers or web-sites and there is no institutional support. A form of ostracism prevails and few but the most dedicated – with no ambitions of a mainstream career - dare to embark on this route

Politically, the significance of this is profound. In the absence of a steady stream nationally-orientated policy ideas, contrasted with the flow of ideas on "European" themes, the EU is seen as the "only game in town". This reinforces the myth that the future lies with "Europe" and lends credence to propaganda that there is no alternative to membership of the EU. As ordinary people become steadily more disillusioned by the policy vacuum, "Europe" wins the game by default.

Thus, the shadow of the EU lies over so many areas of public policy that they become "off-limits" to domestic politicians, who will not or cannot discuss them for fear of pointing up the fact that they lie within the realm of the Union. There is either a "European solution" or no solution at all which means that, when it comes to formulating national policy on a huge swathe of issues, we are seeing the death of ideas.