Does she ever stay at home? 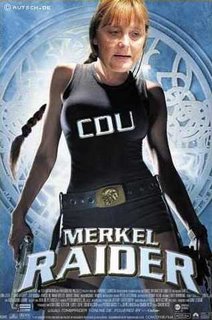 Angela Merkel is getting to be just like Tony Blair mark I, the international statesman who was always found to be in any country but his own. Not that it has done her any harm apparently with the people of Germany.

A survey conducted by TNS Infratest institute for Der Spiegel and mentioned briefly in Monday's Wall Street Journal Europe, 85 per cent want her to “play an important role in the future”. This is slightly ambiguous as the “important role” might mean “as far away from Germany as possible” but it seems that this is viewed as endorsement of her activities as Chancellor up to now.

Nevertheless, she does seem to travel rather a lot, playing, it would appear, the international statesman, the one who will sort out problems within the EU as well as its relations with other countries.

She started her Chancellorship by visiting France and informing the world that the Franco-German axis was alive and well; then she came to Britain to tell the same world that there would be more co-operation between Germany and Britain (another axis, maybe).

Since then she has been whizzing round the place. In particular she went to Washington to discuss the improved or improving German-American relations but undermined that slightly by raising the subject of Guantanamo only to be told to mind her own business. (Of course, Hammadi’s release did not improve those relations either or the still unexplained Osthoff kidnapping and release.)

Then she buzzed off to Russia where she was described by various commentators as showing the world that the “new” Germany was going to be a big player. (As near as I can recall, as this is hardly interesting enough to look up. The fate of the Thames whale is more interesting.)

She did not precisely show Germany’s strength and position by saying anything very difficult to President Putin. After the Guantanamo comment you might have expected a word or two about Chechnya, Russian prisons, control of the media, destruction of economic independence, destruction of regional political democracy and the fate of the NGOs. Or, at least some of those subjects. Apparently, nothing was said.

Nothing much was said, so far as one can make out about Russia’s interesting way of using its enormous reserves of gas to control the politics and economy of surrounding countries. But then, Germany gets something like one third of its gas from Russia and however new the foreign policy might be, it cannot include rows with Putin. Let’s just stick to Guantanamo.

Now she is about to open the Davos World Forum. She will talk about her plans to turn round the German economy and European integration. It will be interesting to see whether she will refer to an interesting essay in “Global Agenda”, apparently the official publication of the World Economic Forum.

Among all the solemn and probably largely meaningless pronouncements by politicians and economists there is an essay by Mazin Qumsiyeh that calls for a world-wide boycott of Israel and makes a number of inaccurate and offensive comments about that country and its people.

Um no, she hasn’t mentioned the booklet but has called for innovation, creative action and free markets as the way forward for Germany and Europe. She has promised sweeping reforms in Germany.

Before that Chancellor Merkel managed to put in another trip to her best buddy l’escroc Chirac. Various German politicians had insisted that she should raise the subject of Chirac’s proposed unilateral nuclear strike but, it seems, that was not important enough for the Chancellor. Neither was the mess in the Ivory Coast, extensively chronicled on this blog.

They did, apparently, talk about hairdressers and other service providers, as my colleague noted.

And now what? Will the lady stay at home for a bit? Those reforms will not simply happen of their own accord.