The shapes of war 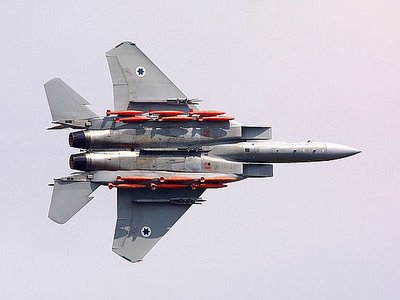 The photograph (left) shows an Israeli Air Force F-15E, a specially built, long range version of the Strike Eagle. And it is this beast, according to the Scottish newspaper, The Herald that is going to be used for a pre-emptive strike on Iran, possibly as early as the end of March.

That is certainly the view of defence correspondent Ian Bruce, who reports that Israel is updating plans for a pre-emptive strike on Iran's nuclear facilities which could be launched as soon as the end of March, citing unnamed "military and intelligence sources".

The F-15E raid will be augmented by cruise missiles against a dozen key sites and are designed to set Tehran's weapons programme back by up to two years. Pilots at the Israeli air force's elite 69 squadron have been briefed on the plan and have conducted rehearsals for their missions.

The prime targets would be the uranium enrichment plant at Natanz, 150 miles south of Tehran, a heavy-water production site at Arak, 120 miles south-west of the capital, and a site near Isfahan in central Iran which makes the uranium hexafluoride gas vital to the arms manufacturing process.

Bruce's sources say one, possibly two airfields in Kurdish northern Iraq have been earmarked as launch-points to reduce flying time over Iran.

The Iranians have meanwhile dispersed production facilities across hundreds of miles of remote countryside to make a single, knockout blow more difficult. They have also ringed the sites, some of them deep underground, with missile batteries and radar-controlled anti-aircraft guns. 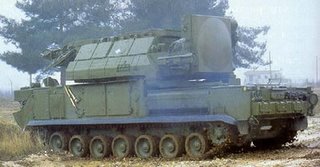 He tells us that part of the reason for an acceleration of Israel's contingency strike plans is that Russia agreed last month to sell Tehran £700m-worth of advanced SA-15 Gauntlet mobile missile systems. This is a low-to-medium altitude SAM system is capable of engaging not only aircraft and helicopters but also RPVs, precision-guided weapons and various types of guided missiles. Deployed around target sites, it could make an Israeli attack hazardous in the extreme and even defeat it.

Some of these missiles are believed to be destined for defence of Iran's Bushehr nuclear plant on the Gulf coast, which Russian engineers are helping to build. 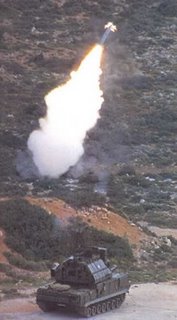 Writes Bruce, although Western military strategists think an attack on Tehran's scattered sites would be fraught with difficulties and could not be carried out without loss to the attacking forces, few doubt Israel's commitment to preventing Iran from acquiring nuclear firepower.

An Israeli source said: "We believe Iran will have useable nuclear weapons by 2007 unless something is done to prevent it. If Tehran is allowed to start enrichment of uranium, it will be too late. Underground facilities have to be supplied with air, water and fuel from the surface. They also have entrances which are vulnerable to conventional attack. Close down the infrastructure and you close down the facility."

Make no mistake, if this does happen, the Middle East will erupt and any semblence of normaility will evaporate. Not least, an enraged Iran could well launch missiles against shiping in the Gulf, closing down the Middle East oil supply and causing economic chaos in Western economies.

Of course, considerable pressure will be brought on Israel to avert this scenario, and much of what is coming out of Israel could be part of a war of words, aimed at prodding the Western powers into action. But, faced with the very real possibility of nuclear destruction, and seeing its options being closed down by the arrival of Russian missiles, it would be unwise to assume that Israel is bluffing.