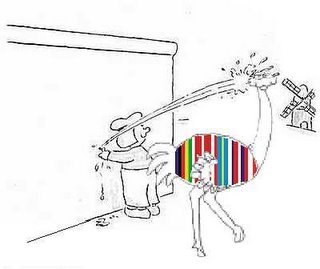 It looks like Austria's love affair with a corpse might be heading for a sad parting, with Dutch foreign minister, Bernard Bot, pointing out the obvious truth that the fair mistress is er… "dead".

Clearly not believing in miracles, Bot, according to the Telegraph and others, has broken to news to the throbbing would-be swain, Wolfgang Schussel, who has been insisting that the constitution was "not dead, but in the middle of a ratification process".

Sweeping away months of euphemisms and half-truths, Bot is effectively pointing out that it is not only dead, but that "the corpse stinketh", and the third day has long gone. Resurrection, as they say, is not an option.

Our own Jack Straw seems to agree. "Since the best that can be said about the draft constitutional treaty is that is in limbo, which is somewhere between Heaven and Hell, it is difficult to argue that it is not dead," he says.

Limbo, or course is for those unfortunates who die without sin, before receiving the sacrament of baptism. The more likely home, therefore, is that other location – purgatory. Perhaps that is what Schussel is hoping, where - according to Catholic doctrine – the constitution can be purged of its imperfections, "much as silver in the fire sheds its impurities".