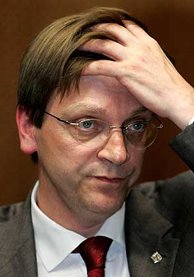 According to a report by Nora Boustany in yesterday's Washington Post and picked up by other publications:

"Belgian Prime Minister Guy Verhofstadt said Tuesday that NATO should establish a network with such countries as Australia and Japan if it hopes to become a global organization. Verhofstadt, who met with President Bush that day, said he suggested that Belgium and the United States set up seminars to discuss the future direction of the alliance."

Errm ... Belgium and the United States? How did Bush manage to keep a straight face, I wonder.