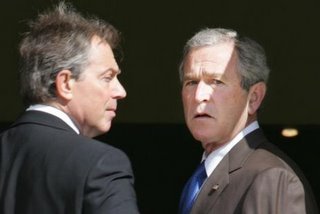 Looking at the two men pictured alongside, ask yourself – who has the greatest power?

Contrary to what many people might think – other than our readers of course – in strictly constitutional terms, it is not president Bush but Tony Blair. He, using the convention of Royal Prerogative, can declare war. And, when it comes to paying for the equipment to fight a war, Blair has the advantage of a standing majority in Parliament, from which the executive is drawn, and can thus both propose and gain approval for funds, with very little trouble.

In this, the differences in the US system come to the fore, where the president is the commander-in-chief of the US forces and, as president, can propose a defence budget. But it is entirely within the power of Congress to approve it, with or without amendment. Invariably, Congress adds many amendments – some quite savage – which the president is often obliged to accept.

In holding to this arrangement, the American Constitution has kept in place that which has been considerably weakened in the UK - the principle of "separation of powers". This is the issue which came to the fore in England during the reign of Charles I, the battle over funding the King's military adventures leading more or less directly to the Civil War and the foundations of our current form of parliamentary democracy.

But, while the principle has seemingly been forgotten in the UK (although there are moves afoot to curtail the exercise of the Royal Prerogative), anyone commenting on US politics needs to be fully aware of its role.

It is thus puzzling that first Reuters - last Friday - and then The Business have picked up on the story run in The Sunday Telegraph last week, which we followed up on the blog.

That story retailed how Blair was intervening personally with Bush in a "last ditch attempt" to save the second engine for the Joint Strike Fighter, which was to be built by a consortium including Rolls Royce. Now, we learn from The Business – in an almost direct copy-out of the Reuters story – that Blair ended a video conference with Bush last week "empty-handed".

Interestingly, Reuters claims as a source, "Loren Thompson, a consultant with close ties to defence contractors and the Pentagon," although a spokesman at the White House would not confirm what was said between Blair and Bush.

Both reports now confirm that it is up to Congress to decide the fate of the second engine – but that was always the case. The Congress has the power on this issue, not the president.

Given the dynamics of US politics, Bush could hardly intervene to change a major Pentagon proposal before its submission to Congress – due on 6 February. That would virtually ensure one or other of the Houses would introduce its own counter-amendment which, having been introduced by Congress, would give it a better chance of surviving.

In effect, therefore, Bush's intervention could well have been damaging to Blair, for a proposal which may in any case be overturned by Congress. It would be much wiser for him to remain above the fray – which is precisely what he seems to have done.

The mystery therefore deepens as to why Blair has embarked on an apparently fruitless and possibly counter-productive course of action and why details of what could be construed by the British as a "snub" have been so readily leaked to the media. We thought in our earlier piece that Blair could be preparing the ground for the cancellation of the JSF and, of course, this apparent snub from an American president would go down well with his left wing, muting any complaints if Blair did pull out.

If this is the game Blair is playing, however, he is on very thin ice. Loss of the JSF could very well be the blow which finally causes the military to rebel, and start causing serious political damage to the Labour administration, instanced last week when the First Sea Lord complained that the Navy was already too small to defend us.

Due to retire next month, Admiral Sir Alan West added, "Maybe I'm just a silly old bastard". But that "silly old bastard" may be a taste of things to come. Powerful though Blair may be, no British prime minister has ever successfully taken on the Royal Navy – and won.