Death of a conspiracy? 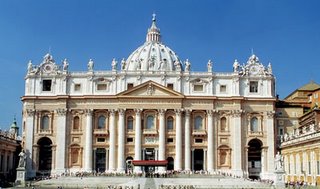 There is a constituency on the fringes of Euroscepticism which believes that the EU is a Catholic plot. This is, at least, a refreshing change from the more prevalent belief that the EU is a Nazi plot, or that the real villains were Bilderbergers.

But, if the Catholics were really behind the EU (not), it would have to be admitted that the commission seems to have an odd way of showing its gratitude.

According to an article in The Times today, the commission is demanding that the Spanish government ends a VAT exemption granted to the Church, which is saving it €25 million (£17 million) a year.

Failure could comply could bring the Spanish government to the ECJ but the action, says The Times, could cause a new row between the Spanish Socialist Government and the Church, whose relations are already frosty. If the government complies with the Brussels demands — as seems likely — but does not make up the shortfall, it will land the bishops in a financial crisis.

The Spanish Episcopal Conference, the Church's ruling body, expects Madrid to pay up, if it gives in to Brussels. But María Teresa Fernández de la Vega, the Deputy Prime Minister, refused to give a commitment, saying only: "We will take this into account when we renegotiate the financing of the Church by the State this year."

Madrid signalled last year that it had plans to cut state funding for the Church, but the exact amount has yet to be decided. Opposition parties such as the Catalan nationalist ERC, on whom the minority Socialist Government depends for support, are against compensating the bishops if the VAT loophole is closed. If the Government refuses compensation and cuts its state grant, the bishops could be €60 million poorer each year.

Interestingly, the commission's notification - in the form of a "reasoned opinion" - dates back to 16 December last year, when attention was focused on the European Council and the budget drama. Thus we all missed it, except the Spanish Noticias and a few others.

Noticias informs us that the commission is challenging Spanish government commitments that it has made under the "Agreement between the Spanish State and the Holy See on economic affairs" of 3 January 1979.

The government argues that this is an international agreement concluded prior to the accession of Spain to the European Community and that the exemption is therefore covered by the first paragraph of Article 307 of the EC Treaty. That paragraph states that rights and obligations arising from pre-accession international agreements concluded by a Member State with a third country are not affected by the EC Treaty.

However, the commission is also saying that this does not prevent Spain from paying some financial compensation to the Catholic Church in return for taxes the Church has to pay to the Spanish tax authorities. Thus, if the Spanish government is forced to cave in and impose VAT on the Church, but does not give the money back in some form or other, there could indeed be a "holy war" between the parties.

It then become a matter solely between the Spanish government and the Church, which leaves the commission in the clear. The conspiracy theorists – some of them – will be able to breathe more easily.