Poland still refusing to shut up 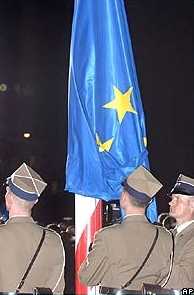 Several of our readers noted yesterday’s report in the International Herald Tribune of the Defence Minister Radek Sikorski’s statements about Poland’s future as he sees it (and finances, helped a bit by the British rebate partially disappearing, permitting).

He sees Poland as a major regional player, with strong defences – with 2 per cent of GDP agreed on as a reasonable proportion of defence spending – and every intention of overhauling the military. Furthermore, Poland is not going to give up its American alliance and will keep troops in Iraq (though reducing numbers) as long as it is necessary.

President Bush and both his Secretaries of State, as well Defence Secretary Rumsfeld worked long and hard to keep Poland and the other East European countries on board. This was not noticed nearly enough in the media here but there were many visits by the previous Polish President to the White House and there will, no doubt, be many by the new one.

Mr Sikorski himself, has excellent contacts in Washington, having spent years there and been a Fellow at the American Enterprise Institute.

Over and above that, there is the small matter of twentieth century history that the pooh-bahs of EU have not taken into account.

We, on this blog, have cast doubt at the economic influence that the new member states, clients one and all, can have on the EU’s development. But we have always maintained that enlargement has put an intolerable strain on the idea of the common foreign and security policy.

In fact, I claim to have spoken about this long before Rumsfeld or anyone else, at a conference in Oxford, before enlargement had actually taken place (and while there were still talks of the Conservatives in the European Parliament leading a new right-wing, eurosceptic, free-market group).

It seems obvious that, given the different developments in the two parts of Europe in the twentieth century, the attitudes to the United States, which is the crux on which the CFSP is based, will be different. East Europeans are not going to be anti-American and are going to be wary of Russia.

Sikorski puts it in a historical context:

“What has not yet happened is a growing together of a pan-European historical consciousness. I think the West Europeans have not fully taken on board our history, our misfortune and our suffering under communism, but also our history as part of the history of all of Europe.

The problem is that for the western members to acknowledge all these historical peculiarites would mean destroying some of the basic and most cherished ideas that lie at the root of European integration and the common foreign and security policy.