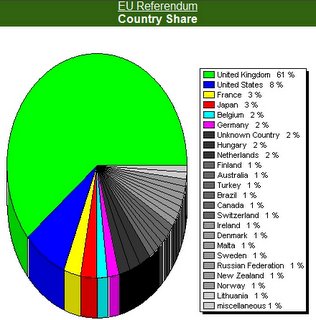 I hate preening on blogs, as much as I do in the MSM… there is nothing so contemptible as the self important newsreader announcing "…the BBC has learned…" or the "dead tree media" story which starts off: “… the Daily Telegraph can reveal…”.

Not that we don't occasionally indulge in some celebration but hey! We're human too (disagree at your peril), and life's motto has always been, "do as I say, not what I do", as every child will attest when confronted with doctrinaire parents.

All that aside, out of sheer interest, I thought I would post this pie chart (double-click to enlarge) captured from Site Meter at 10 o'clock (GMT) this morning, as it demonstrates so graphically the international flavour of blogging.

The chart, incidentally, shows (for us) relatively few US hits, but it only analyses the last 100, at a time when most of our American friends are in bed. In the small hours, the proportion can reach 90 percent.

Although we take it for granted, I still occasionally take time out to marvel at the technology that can allow "little ol' me" in an anonymous, post-industrial suburb of Bradford, England, to press a button and have copy flash down to a server in Los Angeles USA, only for it to re-appear on my screen seconds later, and then be read by people all over the world.

It may be a small thing… but it is something for which we can be grateful. In many ways, it may be our salvation. Otherwise, all we are left with is this.