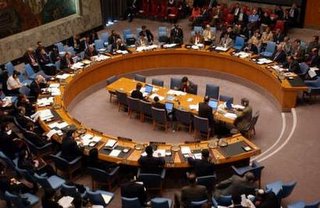 Possibly, the only way that Israel can be dissuaded from taking action against Iran is if the nuclear enrichment issue is referred speedily to the UN Security Council (pictured), followed by a credible threat of real sanctions in the event that the Mullahs fail to come into line.

That, at least is the theory, with Israel signalling that it is prepared to go down the diplomatic route for the time being.

So, given that time is of the essence, once again the European Union is demonstrating its gift for taking the wrong turning. Instead of pushing hard for a reference to the UN, it has decided to slow down its push, in the hope of winning support from Russia and China.

According to the Financial Times, it is now likely to offer Iran one “last chance” by delaying a substantive Security Council discussion of the file to March. It had originally hoped to secure a decisive referral as early as next week but the extra time would meet objections from Russia and China that the EU and the US have been "too hasty".

On this revised timetable, it looks like a final decision on whether the Security Council should proceed to consider action on Iran will not be taken until March, with a full hearing not taking place until some time later.

However, on 28 March, Israel will be holding its general election and, although Likud Chairman Benjamin Netanyahu and Kadima leader Ehud Olmert are running neck-and-neck in the polls, the current figures do not reflect the Israeli public response to the Hamas electoral victory this week.

The chances are that this development will strengthen Netanyahu’s chances which means there is now a more realistic proposition of seeing a hard liner at the helm on the day after the election. And amongst his first tasks will be to assess the whether to launch a strike against Iran.

Delay by the EU on the UN referral will not exactly boost confidence that a diplomatic solution is in the offing. With the clock ticking on the delivery of high-performance anti-aircraft missiles from Russia – plus the news that Iran is embarking on an emergency programme of hardening its enrichment sites – it seems possible that Netanyahu, far more than Olmert, is likely to give the green light.

Once again, therefore, we may see the deadly combination of EU ineptitude and Palestinian activism influence Middle East events for the worse, with the Hamas election providing the trigger that leads to military action against Iran.

Should that happen, of course, the question of whether Israel will move towards negotiating with Hamas will be speedily resolved. Amid the heightened tension that would follow any strike, any such outcome could be safely ruled out.