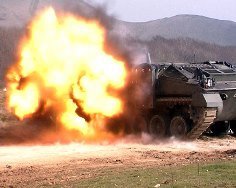 A down-page item on page 11 of the Sunday Times on the somewhat esoteric subject of "electric armour" might seem an odd issue to get worked up about.

Its importance lies, however, in that it illustrates, on the one hand, the failure of the media to get to grip with defence issues (and its sheer amateurism) and, on the other, that it raises – inadvertently - questions about the increasingly perplexing behaviour of the MoD.

First, though, we need to look briefly at the story, which is headed: "Tanks to get anti-missile 'force field'". It is written in a breathless "Boys' Own" style, with a graphic that would not have disgraced any boys' action comic. The British Army's next class of armoured vehicles, we are told, will be protected by a "force field" of electrified armour that will vaporise rocket-propelled grenades. 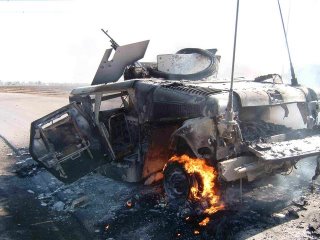 It is being developed to protect forces against terrorists and insurgents armed with the ubiquitous RPG7 rocket-propelled grenade, which can penetrate most current heavy armour, and is so commonly used to trash US vehicles in Iraq.

The armour, the writer Michael Smith goes on to tells us - invented at the ministry's scientific research centre - will transform armoured warfare, enabling vehicles to be more lightly protected and more easily moved around the world.

What immediately strikes me about this is that it is an old story – confirmed by a brief search of the internet. The first British demonstration of the concept was in 2002, which was written up, in terms similar to the current ST story, by The Telegraph in August 2002 and the likes of Wired Magazine in the same month.

The concept, though, is much older – so old that it was being actively discussed by the US House of Representatives Military Procurement Subcommittee in March 1998. Thus, it has taken the Sunday Times the best part of eight years to wake up to the concept and report on it – there's being "on the ball" for you.

This, of course, leads us to enquire why the ST should take the time out now, from its busy schedule - which includes nigh-on three full pages on the Thames whale (in common with the Sunday Telegraph) – to publish the story. That clue is given in the text, where Smith informs us that the MoD has awarded a contract to the US Lockheed Martin company, to make a demonstration version "of the British invention".

I am by no means sure this is a "British invention", but let that pass for a moment. The fact of a contract being awarded seems as good as any for a "hook" on which to base the story – except that the award was in the offing in December and was formally announced by the MoD and Lockheed on 6 January. Even by MSM standards, this is old news.

The contract, incidentally, is one of a raft awarded about the same time for the FRES project, including the award to the Swedish company Hägglunds of the development contract for the vehicle platform, something that the Sunday Times has never seen fit to report.

But leaving that aside as well, we come to the really interesting bit – the award of the contract to Lockheed Martin. 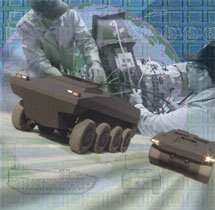 Unnoticed and unremarked by the Sunday Times, Lockheed Martin is one of two US companies leading consortiums working on developing armoured vehicles for the US Army's Future Combat System (FCS). The other is led by US armoured vehicle maker, United Defense – which is also working on (and is well advanced with) the electric armour concept - having already tested it on a Bradley MICV (below, right).

Now, United Defense is wholly owned by BAE Systems. The Swedish company Hägglunds is also wholly owned by BAE Systems. Thus, you have a British company with wholly-owned subsidiaries which are working on electric armour and the armoured platforms to which the armour will – if it works – be fitted. So the MoD awards the development contract to a competitor which, as far as I can ascertain, has no recent history of electric armour development. 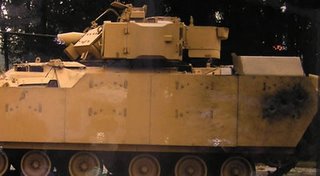 What is going on? I cannot even pretend to know the answers, but something very strange is happening. It does not feel right. Somehow, it is linked to the increasingly bizarre MOD procurement policy, which in turn is driving defence strategy. What we are seeing does not make sense.

The real reason could be that the UK having pulled out of the precursor FCS programme, code-named TRACER, and aligned itself with its European "partners" to develop FRES, the US is not prepared to let it re-enter the programme by the back door, benefiting from technology funded by American taxpayers. Thus we have the bizarre situation of the MoD being excluded from using technology produced by a British-owned company, being forced to look elsewhere.

The point here is that if the Sunday Times was a grown-up newspaper, it would already have covered the electric armour story some years ago and would not be limiting itself to "Janet and John" explanations at this juncture. It would also have covered FRES in its widest aspects and would thus be in a position to be asking the question raised on this blog. With its infinitely greater resources, it could even – perhaps – get some answers.

To return to "Janet and John", however, Smith of the ST tells us that the new "lighter armour" is going to allow the new vehicles to be moved by C-17 Globemaster transport aircraft. The Army's Challenger II tank, which weighs 62½ tons, and the 24½-ton Warrior armoured vehicle had to be ferried by sea to the Gulf for the Iraq war, "a complex process taking many weeks."

This betrays the rank amateurism of the paper. Just for the record, a C-17 can carry a Challenger, and the heavier Abrams – which it did in the Gulf during the last war, delivering a squadron of these heavy tanks to an airfield in northern Iraq, outflanking Saddam's forces.

But what really does make one wonder is how Smith thinks that C-17s can be used to transport anything other than a token force. Currently, the RAF has five such aircraft and no plans to purchase more. Even if you added the whole of the projected A400 "Eurolifter" fleet, we have calculated that it would take six to eight weeks to deliver Brigade-strength vehicles by air, without men or supplies – longer than sea transport.

Smith is indulging in a fantasy – but then so is the MoD. But wouldn't it have made a much better story if Smith had noticed?