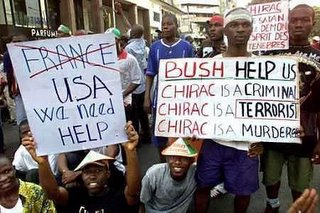 Following what was very clearly an attempt by L'Escroc (whose popularity in the polls is sagging) to cover up the very unsavoury events occurring in the Ivory Coast, another disturbing report about the behaviour of French troops reaches us, this one via that delightfully robust and irreverent site, Fuck France.

The report, originating from the online site, African News Dimension, retails allegations that French troops have been raping young girls and stripping them naked for pornography scenes, in the north of Ivory Coast. One report claims how soldiers forced a young girl to have sex with a dog.

This follows on from other allegations that French soldiers stole €58,000 from the Ivorian reserve bank last year, but they are now accused of kidnapping young girls between 16 and 22 for a strip shows. Some soldiers are said to be giving US$1.50 to the girls "when they are hostile to their disgraceful scenes". 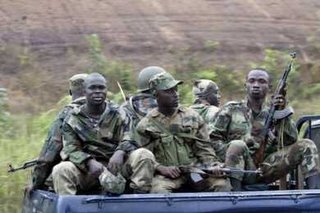 No one – on this blog, at least - is going to claim great knowledge of the goings-on on the Ivory Coast, which is clearly another of those messy African situations with which we are so wearily familiar. Some idea of the complexity of the situation can be gleaned from a number of web-based analyses, specifically here, here and here.

Opinion seems to vary as to whether the French are doing a good job out there, for instance, Worldpress.org, just over a year ago, wrote:

The crisis in the Ivory Coast bears a striking resemblance to events in Rwanda ten years ago. The world had better take notice.

However, it then recorded two opposing views:

"Without France, we would find ourselves in a second Rwanda," claimed Ibrahim Coulibaly, one of the rebels who took control of the north in September 2002, in an interview with Courrier International. He accuses Ivorian President Gbagbo of wanting to "internationalize the crisis and attract neighboring countries into his destructive adventure."

Cameroon's privately owned newspaper, Le Messager (Nov 17), insists that the French and UN peacekeeping forces are the problem, not the solution: "The more time that passes, the more the efforts of the former colonial power and the international community turn manifestly in favor of the rebels, the more radical the militias become. We know what has happened: it's become unbearable."

Interestingly, one of the sharpest critiques of French involvement come from Le Monde diplomatique, which in April 2005 wrote:

The actions of the French Operation Unicorn peacekeeping force in the former French west African colony of Ivory Coast have exposed the greed and seaminess of France's dual role as both mediator and participant.

It points out in detail how French commercial and political interests are combining to strip a once peaceful and prosperous country of its assets, essentially conspiring to destabilise the country when the then president in 1994, Henri Konan Bédié, tried to reduce the French grip on his country – culminating in a French-inspired military coup in 1999, when Bédié was overthrown. The result has been a long and bloody civil war, which even this January saw an attack on a military base in the eastern Akouedo district in Abidjan. 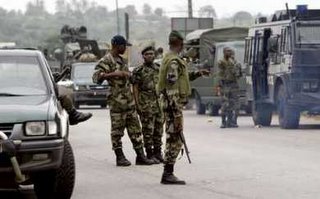 Abidjan and Bouaké have turned into bloody battlegrounds for the French army. French media choose to present this shameful affair in anecdotal rather than political terms. Their refusal to recognise the reality of the situation is exemplified by their failure to publish images of the cleansing of the Ivorian capital by troops from Operation Unicorn. But even if these appalling scenes have not been seen in Paris, Ivorians will never forget them. Even in French Africa it may no longer be possible to get away with murder.

With that article written last year, what is very clear is that Le Monde's optimism is somewhat misplaced. France, it seems, is getting away with murder, and much else besides.

And why this is important – apart from the intrinsic humanitarian issues – is that it involves France, our "partner" in the EU, with which we share, supposedly a common foreign policy. France is also a military ally, with which Blair wants a closer relationship through the European Rapid Reaction Force, which is ostensibly tasked with humanitarian relief.

The behaviour of the French raises the question as to why Blair is not bringing up the Ivory Coast issue through the European Council (he could have, for instance, raised it through the UK presidency period), especially as he has made poverty in Africa a priority issue. But it also raises the question as to whether we can afford to be associated with the French military; whether – to paraphrase Margaret Thatcher – these are people with whom we can, or should do business. 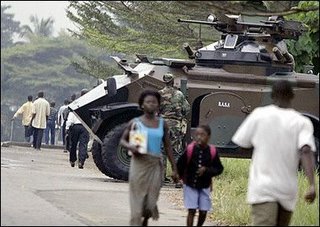 Politically, it raises questions about the inadequacy of opposition parties. The Conservative web site has no references to the Ivory Coast, while UKIP – which is waxing lyrical about the Ruth Kelly debacle - has clearly no opinion on what is, in fact, a sentinel issue in the context of our European relations.

Above all though, this issue points up the indolence and hypocrisy of our media. While the hacks are quite happy to slag off the American administration and military – from the comfort of their luxury hotels in the Baghdad Green Zone, protected by the lives of those very troops they so detest - none of the professionals who employ them and use their copy have stirred themselves to find out what is going on the Ivory Coast, and report it.

One way or another, this is an unholy mess, but most of the mess is on our doorstep.