Down in the garbage 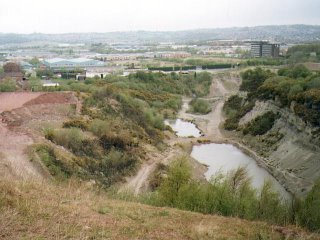 Ruminating, as one does, about the piece I posted last night, the full enormity of the cost of the EU's recycling directives is sinking in.

Any which way you cut it, £10 billion is a lot of money and to find that simply to provide the infrastructure to comply with EU law knocks into a cocked hat the idea that we are an independent nation. There is no way our cash-strapped government would spend that sort of money unless it was forced to and, since most of the money will have to come out of Council Tax, one cannot imagine any government voluntarily loading such huge extra costs onto local authorities.

But what is particularly offensive is that this obsession with recycling – and that it is – is entirely misplaced. Left to the market, paper and aluminium can recycling could be profitable enterprises, placing no burden on the public purse. Similarly, with some inspired tax manipulation, which is practised in the United States, disposal of old cars ceases to become a problem.

Overlaying the recycling obsession, however, is the almost paranoid and totally irrational dislike of landfill, to the extent that the EU is insisting on incineration as a better option, which is set to add another £8 billion or so to our disposal bill.

Yet, there is nothing intrinsically wrong with landfill. In fact, my own personal experience is that, used properly, the process can enhance the environment and public health.

It is always dangerous to argue from the particular to the general, but that personal experience relates to a small field just outside a village of Stainland in West Yorkshire, tucked into the flanks of the Pennines, just outside Halifax. It is a place few people have ever heard of, and to which fewer people have been. As to the field, it is perfectly ordinary – a rectangle of grass used for grazing – to which no one would give a second glance as they drove past.

But when I pass, which is not as often as it used to be, I smile to myself at the knowledge that it is "my" field, the site of a small but enjoyable victory over the forces of bureaucracy.

What makes it special is that, when I was inspector for the district, more years ago than I care to remember, it wasn't a field at all. It was one of those innumerable small, disused quarries that litter the flanks of the Pennines. And, being immediately adjacent the road, it became a favourite spot for fly tipping, a steady pile of rubbish accumulating to the point where a sizeable population of rats was disturbing the equanimity of local residents.

Short of keeping a 24-hour guard on the site, there was nothing immediately I could do about the problem but, determined to deal with what had become a festering sore, I hit upon an idea. After having a word with the farmer on whose land the former quarry was situated, I served on him a formal "statutory nuisance" notice under the then Public Health Act 1936, requiring him, in legal terms, to "abate" the nuisance. 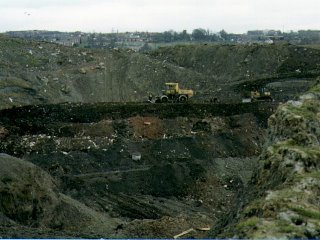 That done, I popped down to our local power station, in the days when we still had one, which had lagoons groaning with the substance called pulverised fuel ash, the residue from the furnaces after powdered coal had been blown into them. There, I told them of the farmer's predicament and suggested that the could perhaps help him out.

Sure enough, that weekend, the peace of that part of rural Yorkshire was broken as a succession of 20-ton tipper trucks thundered through the village. By Monday I was able to turn up at the site, to find level ground, neatly covered by a layer of topsoil.

Back at the office, my telephone erupted. Not least, a very angry planning officer demanded to know why I had "authorised" tipping without planning permission. The County disposal officer was on my back, spitting blood and feathers about unlicensed tipping, and my boss was furious about the rash of complaints from people on the route complaining about the dust and noise.

To the officials, I adopted the pose of sweet innocence, telling them that it was all down to the farmer obeying my legal notice in the full knowledge that, although we had broken every rule in the book, there would not be a court in the land that would convict my man for doing what I had told him to do. As to the local residents, they were quite understanding when I called in on them and told them what I had done. And, from that day to this, it has always been "my" field.

That apart, this was a classic example of land reclamation, and there are many unsightly holes throughout the country, which would benefit from landfill treatment. I have illustrated some here, one a former claypit and another an open-cast mining site. The third photograph shows what a well managed "tip", as we used to call them, can look like. Add to this the use of such techniques as high-density baling and methane capture, and landfill can be regarded as a perfectly acceptable option.

But this is not the EU's view and, based on what amounts to irrational prejudice, we are going to have to spend a small fortune – entirely unnecessarily – on more expensive alternatives. 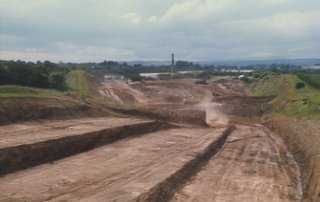 This is what makes me so angry about the likes of Nick Robinson and, to a lesser extent, David Rennie. They burble about the "big picture" but none of them will get stuck into detail like garbage – messy but vitally important things like refuse disposal, where the real and important loss of power manifests itself.

Today, I addressed a group of students at Dinnington Comprehensive School, and asked them to make a choice between paying for a hip operation for a "granny" and buying a new bottle bank. They opted for the hip operation, whence I told them the choice had been made for them. The EU demands bottle banks – or their equivalents, £10 billions-worth.

That is why I hate the EU, and have the heartiest contempt for those superficial, trivial little clever-dicks who are soooo grand and would ignore the reality of what we have become – mere subordinates to the supranational project.