So the charade continues 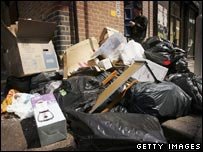 It is rather ironic that, yesterday, I should declare that “there is nothing so contemptible as the self-important newsreader announcing "…the BBC has learned…", only to hear in that evening's BBC news bulletins, repeated on the website, a variation of that very theme: "Ministers are preparing to back a large increase in the amount of rubbish that is incinerated instead of being buried, according to documents seen by the BBC."

And so they drivelled on, telling us that: "An environment department paper, to be published next month, suggests the proportion of burned waste could rise from nine percent to 25 percent in the next 15 years. It urges making 'energy from waste', a process in which incinerators are used to power electricity generation plants."

Only at the very end of the web report, but not on the broadcasts, do we get Steve Lee, from the Chartered Institute of Wastes Management, who says: "We have to cut our reliance on landfill because we've got tough targets under the European landfill directive."

This we have referred to many times on this blog and you can see it for yourself here, if you are sufficiently bored.

Nothing of this comes over from the BBC which even goes to the trouble of asking people on its "have your say" site: "Should we incinerate more waste? Ministers believe more incineration is justified as it is a green source of energy, reduces dependence on foreign fuel and health risks from emissions are small."

I have posted a comment onto this "fully moderated" site, saying: What are you going through this charade or asking people for their views? We have absolutely no option on this. We are required by the EU's Waste Framework Directive to adopt this policy, and the government's strategy is simply a copy-out of the Directive requirements.”

Of course, they won't publish my comment. The BBC managed to get through all its broadcast news reports without mentioning EU legislation and requirements once, so why should it bother now, giving the idea to people that we no longer have an independent country able to make its own laws?