Of friends and enemies 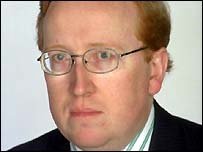 What is it with right-wing commentators? Yesterday, we observed that neo-con supporter Douglas Murray was suggesting the right action on Iran, for entirely the wrong reason.

Now, in the Telegraph today, we have Simon Heffer arguing that "Doing nothing in Iran is not an option", a sentiment with which we could not but agree.

As for his prescription, though, Heffer rightly observes that any military action against Iran, "whatever it is and whoever takes it," is likely to be provocative to the wider Islamic community. He also quite correctly notes that "none is likely to be quite so internationally combustible as a unilateral decision by Israel to bomb - by conventional or possibly other means - Iran."

The, says the redoubtable Heffer, seems to leave only one feasible option – "a United Nations-endorsed series of air strikes on suspected nuclear installations in Iran, made after due and reasonable warning and only as a last resort." All that must be made clear - but it must also be made clear, by the united powers of the United Nations, that any insistence by Mr Ahmadinejad on pursuing his present policy will be met with such a response.

At least Heffer does go on to say it is unlikely that "this happy diplomatic state can be achieved", which has to qualify for the understatement of the year. Russia is on the UN Security Council and thus holds a blocking veto, a country that is flogging billions-worth of arms to Iran, selling it nuclear technology and demurring even at the prospect of trade sanctions, does Heffer really think that there is any possibility at all of the UN authorising air strikes? 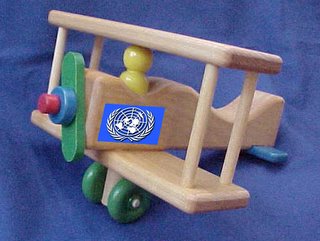 And if, say, the UN – under the management of Kofi, father of Kojo - did managed to get permission to mount an airstrike, who would possibly offer its own aircraft for a strike when, authorisation procedures and the "due and reasonable warnings" will have thoroughly alerted the (Russian-supplied) Iranian air defences which will be ready and waiting? Perhaps the only willing supplier would be Mothercare (right), the aircraft from which would be about as much use as Mr Heffer's ideas.

However, at least Heffer's heart is in the right place. Not so Simon Jenkins who has temporarily departed from The Times to his true spiritual home, The Guardian. There, he proclaims: "The west has picked a fight with Iran that it cannot win".

He would sleep happier if there were no Iranian bomb "but a swamp of hypocrisy separates me from overly protesting it." Iran is a proud country, he writes, "How can we say such a country has 'no right' to nuclear defence?" ... from Israel? And how dare Washington's kneejerk belligerence put the "strong diplomatic coalition of Europe, America, Russia and China" under strain? And America wants to do what?

Jenkins does not see "how all this confrontation will stop Iran doing whatever it likes with its nuclear enrichment". The bombing of carefully dispersed and buried sites might delay deployment, he adds, "but given the inaccuracy of American bombers, the death and destruction caused to Iran's cities would be a gift to anti-western extremists and have every world terrorist reporting for duty." 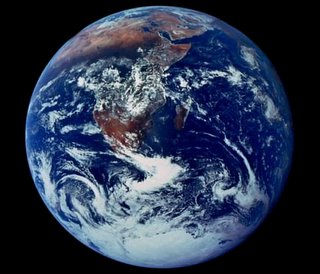 Therefore, for his recipe, Jenkins enjoins us to recognise that Iran "is the regional superstate." If ever there were a realpolitik demanding to be "hugged close" it is this one, he tells us. And, "if you cannot stop a man buying a gun, the next best bet is to make him your friend, not your enemy."

I can't even be bothered to deconstruct this garbage – has he tried talking to the Israelis on this? Has he not seen the video films of strikes in the Gulf, where they can decide through which window they put a bomb? Silly though his ideas may be, I think I prefer Heffer. For Jenkins, I have put a special picture up for him to remind him which planet he is on. He has obviously forgotten.