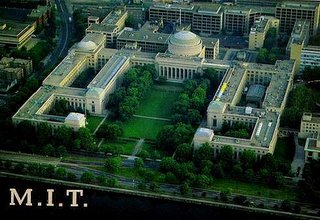 First it was Galileo, then it was Google and now, guess what, it's the Massachusetts Institute of Technology (MIT).

For an organisation which so desperately wants to asserts its own identity on the world stage, providing a counterweight to American "imperialism", the only way the European Union seems to be able to achieve this is to look at what the United States has… and copy it.

So it is that, according to Associated Press, Austria is embarking on another fit of "me-too-itis", declaring that it is going to use its EU presidency to promote a European rival to the Massachusetts Institute of Technology.

This is their "cunning plan" to stop the continent's brightest minds moving across the Atlantic, and they aim to discuss the plan at the March European Council in Brussels.

As always, the "colleagues" are rankled by the success of the US, in this case because the annual ranking of the world's universities by London's Times Educational Supplement showed US institutions holding seven of the top 10 places, with Harvard and MIT heading the list.

The "little Europeans" believe talent is too thinly spread around the 25-nation EU, and co-operation between European countries is needed to create specialised centres where top students, teachers and researchers could concentrate. Thus, the EU commission is working on the creation of a European Institute Technology that will be presented to national governments for approval.

And (another) guess what… You will really be staggered by this. French prime minister Dominique de Villepin wants the institution be created in Paris with a $360 million starting budget, paid-for out of EU funds of course.

As least there is a dissenting voice. Jorgo Chatzimarkakis, a German member of the EU Parliament's research committee, says: "Everybody knows that it cannot be a copy of the MIT because the MIT needed 150 years in order to become successful, and we don't have that time."

"There is a big, big reluctance among the European universities to accept a new competitor," he adds. "The idea of creating a super, elitist university is not feasible."

Mind you, his alternative is not much better. He wants a European "network of networks" connecting universities and industry to ensure that research is turned quickly into workable business ideas. "We don't have a lack of ideas," he says. "We have a difficulty in implementing ideas... this is our problem in Europe."

What none of the other dire, inwards-looking, lame-brains realise is that the MIT is both a symbol of the economic system it supports, and a creation of it. To duplicate the MIT, you have to duplicate the system as a whole. And that is the one idea they do lack. But then, what do you expect from "little Europeans"?