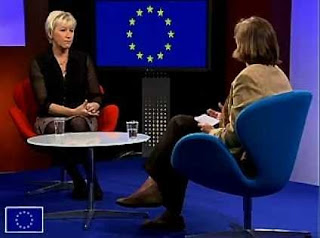 Life is full of disappointments. When the fragrant Margot Wallström first started haunting the blogosphere I thought I was well set up for entertainment for many years to come. Sadly, the woman and her blog turned out to be so utterly boring that, together with most other people, I stopped reading her stream of consciousness burblings.

Still, she does, from time to time, brighten up the horizon of EU politics with her insouciance and, frankly, rather silly suggestions. Whenever the Fragrant Margot appears I cannot help being reminded of a scene in that great film, “All About Eve”, when the very clever and poisonous critic Addison DeWitt, played by the incomparable George Sanders, replies to a comment made by Miss Claudia Carswell, of the Copacabana School of Acting, played by Marilyn Monroe with the words: “You have a point there. An idiotic one, but a point.”

Anyway, she is back with some more idiotic points.

Yesterday EurActiv informed us all that a new plan would be unveiled to encourage the citizens of the European Union to love said Union. It is to be proposed that

member states and EU institutions put an end to the "Brussels blame game" and join forces around a common communications strategy in order to win back support from citizens for the 2009 European elections.

Well, it’s a thought. An idiotic one, but a thought. Let us see what this will consist of. It seems that the first thing to be achieved is for the EU institutions, the Commission, the Toy Parliament and the Council to stop communicating with the people separately through their own organizations and channels but to unite in a new “inter-institutional agreement”.

A new plan to "Communicate Europe in partnership", to be unveiled on 3 October by the Commission, proposes an "inter-institutional agreement" to align communication priorities among EU institutions and member states.

Priorities are to be laid down in "management partnership" agreements negotiated with each national government, in order to try to get the message across at the local level.

Climate change and energy, the EU's new 'Reform Treaty', growth and jobs and mobilising voters in the run-up to the 2009 European elections should all be among the common priorities for such an inter-institutional agreement, said Margot Wallström, Commission Vice-President in charge of institutional relations and communications strategy.

But the laughter dies when one reads the next two paragraphs:

It is also the Commission's wish that member states do more explanatory work at an early age with the inclusion of basic education about European integration in school curricula.

"It has to start with the civic competences and the civic education. EU citizens have a right to know and to be heard," Wallström told a group of Brussels journalists on 2 October.

Now that, oh Fragrant One, is known as brainwashing of children. Well, actually, attempted brainwashing. Since teachers in most schools teach next to nothing anyway and pupils manage to ignore the little they are taught, most of this rubbish will be water off a duck’s back. But as a matter of principle, this must not be allowed.

As it happens, there is legislation in this country that prevents or tries to prevent one-sided political propaganda in schools and there is really no point in saying this is merely civic information.

We, on this blog, are all in favour of information about the EU being as widely disseminated as possible. We want people to know from an early age that somewhere around 80 per cent of the legislation comes from Brussels and our own Parliament cannot stop it.

We want everyone to know that the highest court in the land is not the House of Lords but the European Court of Justice.

We want children at a certain age to understand that inadequate scrutiny by a powerless committee is not the same of legislation.

But, when it comes to European integration, it is a political issue and a highly contentious one at that. Therefore, it should be rehearsed only as one side of a debate.

The proposals were duly presented. Apparently we got the usual canard about people out there neither knowing nor caring what the various institutions are and merely wanting Europe to get on with its job of making everybody’s life wonderful.

Actually, they are wrong. People do not know and may not care about the different institutions. But they do seem to care about the fact that the chasm between them and the people who have taken upon themselves to run their lives is becoming ever wider. They do care about their liberties and about accountability in government.

Yet again, the Fragrant Commissar is making a point, which is seriously idiotic but essential to her self-delusion.

In case we have forgotten what this structure is like, there is a reminder:

The latest paper is a follow-up to a White Paper published in February 2006. This called for joint action by all the major players – EU institutions, Member States, European political parties and NGOs and invited all interested parties to submit comments. Hundreds of replies were received and several conferences were organised to discuss the issues further. The current paper is the
result.

Ah yes, those interested parties, carefully chosen by the Commission to give the sort of responses they want to hear. Let us not trouble ourselves with people who actually would like to see a real discussion of what the future of European countries should be.

Still there is something to be grateful for – no extra money is to be allotted to this new inter-institutional agreement that will look upon the member states as partners in the dissemination of propaganda.