The fog of misinformation and incomprehension 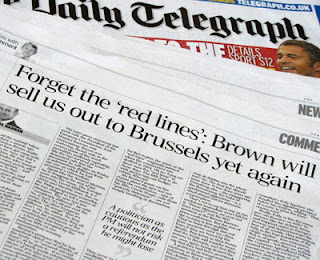 A profound cloud of depression looms over this blog (in which we are by no means alone) as we confront the certainty of the outcome of the IGC summit in Lisbon, for which Brown – or his flunkies – is already packing his bags.

The headline to Daniel Hannan's piece in The Telegraph this morning sums up the state of play, as it declares: "Gordon Brown will sell us out to Brussels again." You can read the rest if you wish - it is quite entertaining - but the headline tells you almost all you need to know.

Actually, the headline in the print edition is more explicit, adding "forget the red lines" – good advice as they are indeed a massive red herring. Following the government's lead and focusing on this issue has been one of the many tactical blunders of the so-called Eurosceptic "movement", which has characterised itself by its lack of joined-up thinking (or any serious thinking at all) and its almost total lack of professionalism and direction.

Thus is the Guardian leader this morning able to prattle about, "A good treaty for Britain", noting how:

It is also time to recognise how Britain's anti-Europeans consistently exaggerate the threat. Foreign policy is a classic example of their mischief. It is simply untrue that Britain's independent foreign policy or its seat on the UN security council is under threat from the treaty.

That and many other canards have been raised by the anti-treaty lobby, in their dire, amateurish attempts to talk up the evils of this latest round of European political integration. In so doing, they have largely ignored (or failed to understand) that the primary purpose of the treaty is to reinforce the extent and grip of the structures of the European Union which are, de facto - and, with this new treaty, increasingly de jure - the supreme government of the UK and the 26 other "member" states.

The great genius of the "colleagues" is to disguise this slow-motion coup d'état, using – as we have pointed out before - the anodyne term "institutions" as a substitute for the more accurate descriptive term, "government".

We saw the alacrity with which the "colleagues" moved to bury any suggestion that the treaty did in fact involve the most fundamental changes to the nature of this supreme government – which alone justify the rejection of the treaty, and present an unanswerable case for so doing – and their very alarm should have triggered an awareness that this was their weakest point.

But no! Since, we have seen even more prattling and ill-focused attacks on peripheral issues, reflecting the limited understanding most of the anti-treaty lobby have of the process of political integration.

So it is that, shrouded by the fog of misinformation and incomprehension, we see a prime minister of the United Kingdom jet off to a foreign land to cede more power and authority to an alien form of government, while submerged in the latest prattle about "red lines", "opt-outs" and the rest.

In many ways, we get what we deserve and deserve what we get. Thus, in the annals of political integration, we see not only a victory for the "colleagues" but another monumental failure of the Eurosceptic movement – after fifty years of failure – to get its act together. Now we are paying the price.