Vain the ambition of kings 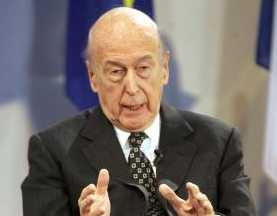 This is the second time. The first was in July, when Valéry Giscard d'Estaing told the world that differences between the (proposed) new treaty and the EU constitution, "are few and far between and more cosmetic than real".

Now, in a way that could be hardly more spectacular and public, he has written an open letter to Le Monde declaring, "the tools are exactly the same ones, only the order was changed in the toolbox".

Picked up by The Daily Telegraph, we learn that the treaty was "rewritten" in a different order just to avoid the need for referendums.

In the letter, he says that "the constitutional draft treaty was a new text, inspired by a political good-will, and replaced all the former treaties." For the treaty of Lisbon, the lawyers of the Council "reverted to the traditional way followed by the institutions of Brussels." This, he says, consisted of "modifying the former treaties by way of amendments."

Thus it is that the treaty of Lisbon is exactly in the line of the treaties of Amsterdam and Nice. The lawyers did not propose innovations. They retained the text of the constitutional treaty, from which they extracted (broke out) the elements, one by one, and returned them, by way of amendments to the two existing treaties of Rome (1957) and Maastricht (1992).

Thus, Giscard confirms, the treaty of Lisbon ends up as "a catalogue of amendments" to the former treaties. It is illegible to the citizens, he adds, "who must constantly refer to the texts of the treaties of Rome and Maastricht, to which these amendments apply". But, "the result is that the institutional proposals of the constitutional treaty - the only ones which counted - are found complete in the treaty of Lisbon, but in a different order, to be inserted in the former treaties."

So does Giscard expose the "constitutional concept lie" so egregiously peddled by Brown and his cohorts, one which the high profile, pro-referendum campaigners have singularly failed to address.

But the question remains is why should a man who regards himself as the "father of the constitution" apparently put his treaty at risk?

At first sight, it looks like extraordinary arrogance – the most extreme form of hubris – but there may be a more pedestrian explanation: an old man's vanity. It was his constitution - his bébé - and he wants it recognised, to say nothing of his own part in producing it. Such is his confidence that it will go through, he is not worried by the prospects of a backlash. The dramatist John Webster (c. 1630) had it:

However, it seems inconceivable that Giscard's statements will have no political effect. Not least, published in a leading French newspaper, it must surely wake up the French to the fact that the result of their referendum is being ignored. And, in British politics, it so clearly exposes Brown's lies that surely he will have some difficulty repeating them with a straight face.

Of that, we can but hope, but in so doing, we take a little comfort from Webster, who said of the "vain ambition" that all the kings manage is to, "weave but nets to catch the wind."