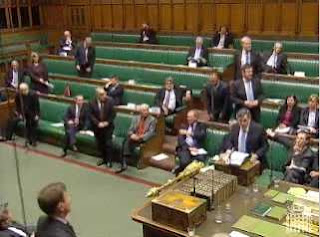 As is traditional, the prime minister has reported to the House on the outcome of the IGC summit of last week. This is something of a formality, as the details have been fully rehearsed by the media, but the formalities must be observed, not least because the give MPs an opportunity to ask questions.

So it was that at 3.30 this afternoon, Gordon Brown stood up in the House to make his statement, the text – not doubt – being a rehearsal for the many speeches to come, that he will make on the issue.

And once again, the Brown led in with the constitutional concept lie, so so firmly embedded that it has becomes the centrepiece of his case.

"The mandate for the IGC," he declared, "made clear that the constitutional concept …" At that point, there was what Hansard describes as an "interruption", requiring the Speaker to intervene, allowing Brown to continue with the leaden, predictable lie. "The mandate made clear that the constitutional concept, which consisted in repealing all existing Treaties and replacing them with a single text called 'Constitution', is abandoned".

We are indeed paying the price for not nailing this early, and that price is going to be constant repetition, to the point of nauseum.

Then, in quick time. We get Brown with the "British national interest" claim, followed by a promise that Parliament will have "the fullest opportunity to examine the protocol on the charter of fundamental rights." This is "red line territory" and the prime minister spends some time on it, and allies issues, playing the "red herrings" for all they are worth.

One suspects he would be a truly happy man if MPs expended most of their energies on these issues – anything to keep them from looking at the treaty proper. 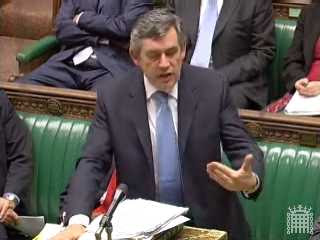 We get a brief sojourn into qualified majority voting and abolition of the vetoes, all pointing to the how trivial they are – others are "technical or procedural" a warning that the anti-treaty lobby is placing far too much reliance on them, and then a reiteration that the new treaty "also expressly provides that national security is the sole responsibility of member states."

At this point, we begin to see that Brown has nothing new to offer – the strategy is clearly to "keep repeating the mantras", against a promise of a bright new future where the EU will now be able to tackle the "pressing issues" such as climate change and energy security; combating terrorism and organised crime; reducing global poverty; and reforming the European Union budget. Says Mr Brown:

It is by putting in place those changes that we can create a truly outward-looking, globally focused European Union that helps deliver prosperity, opportunity and security for all, with an agenda that is good for Britain and good for Europe, and that allows us to continue to benefit from our membership of the European Union and, by working together, to have a greater influence in the world.

In other words, all us luddites are preventing the EU from delivering the promised land and, as soon as we are silenced, it can only get better.

Cameron then had his turn and, by some accounts, did well in challenging the prime minister. But it was not an immediate attack on the treaty. The "fundamental question" was – just as predictable as Brown's line – an issue of "trust". "When a party makes a promise in a manifesto, can it be trusted to keep it? ... If Labour can't trust the people, why should the people trust Labour?"

For sure, Cameron has got the message about the "red lines", calling in aid Gisela Stuart who had called them "red herrings". But the one thing he did not address was whether we'd get a vote if the Treaty was ratified. Instead, we got a clever bit of knockabout politics, Cameron citing Blair on the occasion that he announced a referendum, those famous words on 20 April 2004: "let the battle be joined" (which brought this blog into being).

The prime minister, on the other hand – according to the Boy – said: "let battle be avoided wherever possible, especially if people are to have their say. That is why he is not having a referendum. He does not think he would win it. Why does he continue to treat people like fools by pretending otherwise? Why does he continue to put forward arguments that do not even convince his own colleagues?"

The debate then continues but the scene is set, and provides a taste of things to come. We are not, on current form, going to get any forensic analysis of the dire implications of this treaty. It is going to be people with their own, pre-prepared scripts, shouting past each other, in the hope that they will score with their target audiences.

Those who have a warm glow about the "supremacy of Parliament" might well wonder why they are so concerned when they see the game playing which studiously evades the issues that are of such serious concern. At least, if we did turn the House into a museum of democracy, we would get more value for our money.