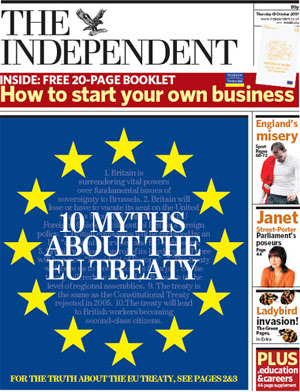 The Independent today devotes its front page to "Debunking the Eurosceptic myths about the EU Reform Treaty", offering ten, it thinks, of the key points where we have got it wrong.

There was a time when such an affront would have had us busily tapping away at the keyboard, earnestly addressing each of the issues, doling out our own debunking of the debunking. These days, however, one looks at it, shrugs, yawns and moves on. This trite pastiche is not worth the effort.

More to the point, to take on board the highly selective, narrow scope of their version of the argument is to accept their definition of the issues, allowing them to frame the debate. Thus does one concede the game.

Equally blinkered, however, is the other end of the spectrum, as doled out by the front page leader of The Telegraph today. It laboriously asserts: "Brown must be brave and give people a say on EU treaty". Part of its case is that public opinion, "mobilised not least by The Daily Telegraph in its 100,000-strong petition", strongly disagrees with Brown's decision not to hold a referendum.

For sure, the the latest opinion polls support the paper's contention but, in terms of their numbers, it is germane to note that the petition on the Red Arrows and their appearance at the opening of the Olympic Games has attracted 184,886 signatures.

Most of all, though, The Telegraph completely misunderstands the dynamics of and the driving forces behind European political integration, and the political pressures that impel Brown to agree this treaty over the next day or so. Thus, in its own way, it too presents a pastiche – a parody of the arguments – that is no closer to reality than the Independent.

With real understanding comes the point that we have rehearsed on this blog, and need to explore more frequently and in greater depth – the central truth that the European Union is not really about "Europe" at all. The system of government which it embodies is not being imposed on us by foreigners but by our own political classes.

Thus, look not to Brussels but to London. It is what our own people are doing to us. Brown goes willingly to Lisbon to agree the new treaty because it suits him and the political classes he represents.

This is a theme to which we will return.