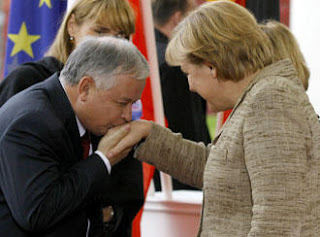 In what might best be described as a slow news day, one of the lead items on the EU treaty front yesterday was an unscheduled meeting between Polish president Lech Kaczynski and German chancellor Angela Merkel, at which meeting – held in Berlin - Kaczynski said he was optimistic about the chances of reaching a deal on the EU reform treaty.

The point about this is, frankly, who cares? Our own Beatroot points out that Polish politics are probably as big a farce as our own, and these little games the European politicians are playing in the run-up to the IGC impress very few of us indeed.

Daniel Hannan set the tone, describing the posturing as the "quadrille" and latterly, Fraser Nelson on the Spectator blog picked up the theme, with a short but pointed post, headed: "How Barroso and Brown could stitch up the press". He wrote:

If I were Barroso, I would pick a huge, fake fight with Gordon Brown before the EU constitution, sorry, treaty is signed. His plea today that Britain should not be "closed to Europe" is what the PM needs. The two have to pretend to be at loggerheads, let the press write up a split, then a "bulldog Brown triumphant" headline at the end. Brown's problem is that he's already claimed his so-called "red lines" have been met. So how can he claim they are suddenly under threat again? We'll see.

Anyone with any understanding of this IGC process can see through the charade, and the more honest journalists are beginning to say so. However, there will always be the "useful idiots" like Mark Mardell. They are the sort who are happy to quote uncritically the likes of Barroso prattling on about needing "to ensure that a system created for six member states is capable of functioning more effectively for a Europe of 27 member states and more."

This new treaty is, of course, nothing to do with that but what the heck. We can deny it until we're blue in the face, while the "colleagues" will continue repeating their lies, and all their little mantras, as long as there are people like Mardell to give them a platform.

And so the "quadrille" goes on, and on and on …