A load of rubbish 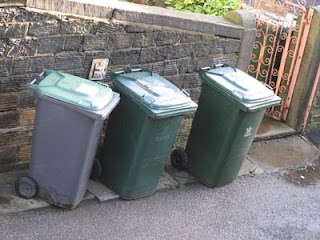 In addition to immigration, The Daily Mail also takes up the waste charging issue, with a long piece headed: "Barcode on your bin - and a £100 fine if you put too much rubbish in it".

Additionally, they commissioned Christopher Booker to do an opinion page but, with the news on immigration, this was displaced to become a "commentary" of considerably shorter length. However, Booker has sent us the full version (now also on-line), and we publish it here:

Yesterday came two further twists to the unending saga of what has become the best-kept secrets of British politics - the real reason behind why we are making such an unholy mess of the way we dispose of our rubbish.

First, following Gordon Brown's apparent U-turn on the Government's plans to introduce a "pay-as-you-throw" charge on emptying our dustbins, came the revelation that his ministers are still planning this new stealth tax in their Climate Change Bill.

Second, by no means unrelated to the first, came the warning by a committee of MPs that we may soon face a staggering £180 million a year fine from Brussels for being in breach of EU rules on the amount of our rubbish we send to landfill.

Scarcely a day has gone by in the past year without some new headline over the chaos which has been engulfing our system for collecting and disposing of waste.

There have been the endless rows over the glaring flaws in the new fortnightly collection system and the bewildering proliferation of different bins into which we now have to sort our various types of rubbish, including on the spot fines for homeowners accused of dropping even a single envelope into the wrong container.

Last year it was reported that no fewer than 40 percent of our binmen had experienced incidents of verbal or physical abuse from angry householders.
All this is in the worthy name of promoting more recycling of our waste. And yet it turns out that millions of tons of rubbish supposedly collected for ‘recycling’ are still being quietly dumped in landfill sites, or shipped out in containers to China and elsewhere, where much of it is not recycled at all.

Not the least scandalous aspect of this shambles, however, is the way our ministers never honestly explain to us why it is all happening.

The story behind what has become our best-kept political secret began 20 years ago when we handed over the right to decide our waste policy to Brussels under a European treaty. In the 1990s, led by countries such as Denmark and Holland, which were running out of space to bury their rubbish, the European Commission began planning a major new waste policy for every country in the EU.

At its centre was the so-called Landfill Directive in 1999, the aim of which was to phase out disposing of rubbish in holes in the ground, switching the emphasis to as much recycling as possible, while incinerating the rest.

In theory, like many ideas emanating from Brussels, it seemed like a laudable aim. But in practice there was no country in Europe on which the new policy would have greater impact than Britain, because traditionally we had landfilled much more of our rubbish than anyone else.

In fact we had already been developing a pretty efficient recycling system, for items such as paper and glass, relying on the free market. Our system for collecting and recycling old vehicle batteries was the most efficient in Europe.

Furthermore, our reliance on properly-regulated landfill had much to commend it, as a way of reclaiming considerable quantities of otherwise unproductive land, such as abandoned quarries, returning them to beneficial use.

But thanks to the EU we now faced effectively a far greater revolution in our waste disposal system than any other country in Europe, and it is this which has now reduced our own once-efficient system to chaos.

An early example of this was the way we were forced by another EU directive to abandon our system for collecting and recycling old car batteries and to replace it with one so much more cumbersome that the proportion of batteries recycled dropped from 97 percent to less than 80 percent.

In the past few years other directives have made it ever more difficult to dispose of all sorts of items, from fridges to old paint cans, predictably leading predictably to an explosion in flytipping.

At the same time, to meet the requirements of the Landfill Directive, our Government has been piling on local authorities and businesses an ever higher tax on every ton of waste dumped in landfill – currently £24 a ton and due to rise by £8 a year until it reaches a prohibitive £60 - with the fast-looming prospect that, after 2010, if we can’t meet our strict EU targets, we will face massive yearly fines from Brussels.

With this in mind, last year, co-ordinated by a quango known as WRAP, our local authorities began launching their new collection system, the bewildering array of bins, fortnighly collections and the rest, all in a forlorn bid to avert those EU fines (the MPs’ estimate of £180 million may well be an underestimate – Liverpool council alone predicts that its ratepayers will have to pay £30 million a year).

But almost a greatest scandal of all has been how so much of this policy has been based on a colossal act of official humbug. So long as the contents of our bins can be labelled as "waste collected for recycling", they count as a plus towards meeting our EU "recycling" targets - even if millions of tons are then shipped out to the Far East or discreetly landfilled.

Earlier this year an enterprising ITV programme West Eye managed secretly to film hundreds of tons of already composted waste simply being dumped into a Somerset landfill site. Similarly cynical operations are going on in many parts of the country.

The net effect of all this is that, in a desperate effort to comply with EU laws, we have the worst of all worlds. We have exchanged our once efficient home-grown waste disposal system for one that is creating chaos and unpleasantness in all directions (undermining the once friendly relations between bin men and the public).

In our efforts to placate the EU, we are paying ever higher taxes on the rubbish we still landfill, while pretending that much more of our rubbish is being recycled than it actually is – yet still facing the inevitability of those fines from Brussels which before long could be running into billions of pounds.

Meanwhile millions of fridges, TV sets, old cars, batteries, sofas, paint cans and piles of rubble are being chucked over hedges or left in lay bys – with the only response from our politicians being to demand yet more fines for fly tipping.

But their worst betrayal of all is that they will not explain to us openly why this is all happening. Had we not surrendered the right to decide our waste policy to Brussels in 1987, we would have been free to develop a waste policy suited to Britain’s particular needs.

Instead of which we are landed with a disaster entirely of the politicians’ own making: one which leaves them so little power to remedy the situation that all that is left to them is to dither over whether or not they dare charge us even higher taxes for a service they can no longer properly provide.

What is really amazing about this issue is the way, uncritically, the general public - and people who should know better - have accepted that Greenie/EU "landfill" is bad and should be abolished.

The big mistake, of course, was to allow the term "landfill" to gain currency. How different would be the perception if it was understood that, in many cases - such as restoring unsightly and dangerous quarries - the process is one of land reclaimation. Further, the methane generated from tips can also be recyled, used as a source of renewable energy.

That aside, "controlled tipping", as we used to call it, when run properly, it is the most sanitary, the cheapest and the most environmentally neutral way of disposing of rubbish that cannot be economically recycled (and that includes most household waste). But such is the grip of the EU agenda that few people will speak for a tried and tested process, and likewise speak out against vastly more expensive and environmentally damaging alternatives.
Posted by Richard at 12:49