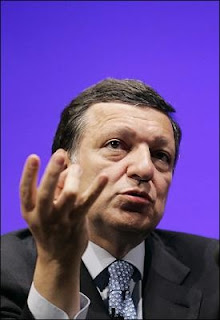 In full flow earlier this evening, Jose Manuel Barroso addressed an invited audience in Oxford University at the invitation of Timothy Garton Ash and Kalypso Nikolaïdis.

He started his speech (full text here) by quoting John Stuart Mill and his observations on Europe. In Chapter 3 of On Liberty, said Barroso, he compares European dynamism favourably with what he described as the "stationary" nature of Chinese society. Drawing from this Barros cited this passage:

What has made the European family of nations an improving, instead of a stationary portion of mankind?

Not any superior excellence in them, which when it exists, exists as the effect, not as the cause; but their remarkable diversity of character and culture.

Individuals, classes, nations, have been extremely unlike one another…Europe is, in my judgement, wholly indebted to this plurality of paths for its progressive and many-sided development.

Barroso takes this as a justification for the European Union. He can't vouch for Mill's views on China, particularly today, declares the commission president. "But on Europe he is spot on. Europe's unique strength is its capacity to combine unity with diversity."

This, to say the very least, is a somewhat elastic interpretation of Mill's work, but it is also highly selective. Turning to Chapter 17, we see a treatise on Federal Representative Governments where, "to render a federation advisable", Mill sets several conditions. And, of these, it is the first that sets the hurdle. Says Mill:

…there should be a sufficient amount of mutual sympathy among the populations.

The federation binds them always to fight on the same side; and if they have such feelings towards one another, or such diversity of feeling towards their neighbours, that they would generally prefer to fight on opposite sides, the federal tie is neither likely to be of long duration, not to be well observed while it subsists.

The sympathies available for the purpose are those of race, language, religion, and, above all, of political institutions, as conducing most to a feeling of identity of political interest.

Whatever else, within this Britain of ours, there is no "sympathy" of political institutions and there is most definitely no "feeling of identity of political interest."

Strangely, we heard nothing of this from Barroso. One should, therefore, be rather wary of presidents quoting Mill.