Finding a way back 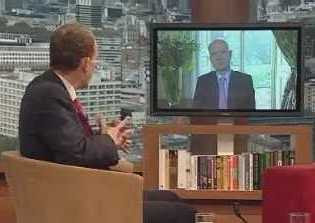 If the Maastricht Treaty seemed to be five minutes to midnight, writes Rees-Mogg in today's Times, this reform treaty is at least five minutes past midnight. So far as Europe is concerned, this did not look like the end of the old era so much as the dawn of the new one, in which a single European state will take over, and the independent nations will fade away.

This is all the more reason why, if the Tory opposition to the treaty is principled rather than opportunist, they should commit to a referendum when (if) they get into power, irrespective of whether the treaty has been ratified.

However, under the spotlight from Andrew Marr on BBC television yesterday, Hague reiterated his position, first articulated on the Today programme. Although he conceded that his Party was "unlikely to win", he nonetheless refused any commitment to a post-ratification referendum.

This was after Marr had asked the two Lib-Dem leadership campaigners – Nick Clegg and Chris Huhne whether they would support the current push for a referendum, whence both men said: "no".

However, the Financial Times, this morning, sees a shift in Hague's position, brought about after nearly 40 Tory backbenchers had signed an early day motion calling for a post ratification referendum.

This paper reports that a Conservative government would seek to remove Britain from the treaty, based on Hague telling the BBC: "We don't rule out a referendum in the future and our discussions will take place against a background that this treaty, if passed without a referendum, will lack democratic legitimacy."

We are also told that Cameron is "aware of the risk" that an apparent "obsession" with Brussels could alienate large chunks of the electorate, with polls consistently showing that Europe ranks very low on most voters' list of priorities.

But Hague's counter is that, "We have to look at what is right for the country... it isn't the Conservative party that has brought this up, it's not us banging on about Europe, it's Gordon Brown who promised a referendum." He adds that, a ratified treaty would mean that the process of European political integration had gone too far, adding, "we do have to find a way back".

That is very much going to be the acid test for the Conservatives. Too many people are seeing more than a touch of opportunism in the current stance, and there is absolutely no value in the Tories fighting the good fight, and losing the battle.

If their opposition is to mean anything at all, they are indeed going to have to find a way back. Accepting the status quo is not an option, a view with which, it seems, The Daily Telegraph leader agrees.

Meanwhile, we can look forward to a new holiday.