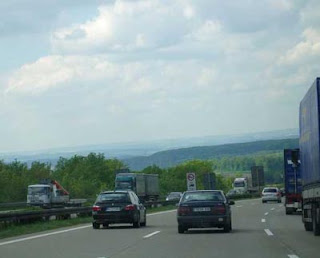 Or, in the case of Germany, no limits. Despite somewhat less than subtle hints from EU environment commissioner Stavros Dimas, last March, that the German government should introduce a speed limit on the nation’s autobahns, Angel Merkel had decided to put her foot down, and allow her fellow citizens to keep putting theirs down. She has decided that there will be no upper speed limit on currently unrestricted roads.

In standing firm, Merkel is not only seeing off the EU commission but also snubbing her own coalition's junior party. Members of the centre-left Social Democratic Party had backed a proposal to introduce a general speed limit of 130 kph (80 mph).

Asked in an interview to be aired Monday on state-run ZDF television station what she thought of the proposal, Merkel flatly rejected it saying, "It won't happen with me."

Nor is Merkel buying the green agenda. The current high-speed tradition has come under attack for is excess carbon dioxide emissions, but the German chancellor argues that better traffic management systems would be a more effective way of preventing excessive emissions. The lengthy traffic jams that often clog the autobahn, are equally detrimental to the environment as high-speed driving, she says.

Now, if we could just get Merkel thinking about EU treaties in the same way as speed limits, perhaps we could make some progress.