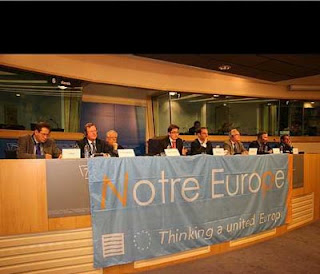 The Fragrant One, over on her clog, is chirping away happily about what one British woman described as a "life-changing experience".

This was Tomorrow's Europe event last weekend, an exercise in what is called "Deliberative Polling" – "an attempt to use public opinion research in a new and constructive way."

The process, we are told, is designed to tell us what conclusions the public could reach, if people had the opportunity to get together, to gain "balanced information", and to become more engaged by the issues.

What that amounted to was collecting a "scientifically representative sample of the European population," composed of 362 citizens, "selected through a poll held in the 27 Member states of the EU".

It was then "informed" in a "balanced manner" and brought together for three days to the EU Parliament in Brussels, where the dupes were allowed to "deliberate" on the agenda set and controlled by their mentors, following which their opinions were gathered.

As the press release burbles (link above), "as a result of deliberating, the participants became dramatically more informed and changed their views about a number of important issues." That any group, addressing a carefully controlled agenda, and manipulated in a hot-house environment over three days would have amongst their number people who "changed their views", goes unsaid. 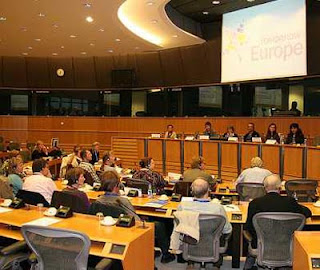 But what is delivered is a number of findings that are both pointless and irrelevant, except that they will be treated with undue reverence by the EU commission and its lackeys, who will cite them as evidence of what the "citizens of Europe" think and want.

No doubt, they will purr at the response to the question of whether EU or the individual member states "should play more of a role in decision making in certain policy areas," with "majority support for the EU rather than just the member states" in most areas: international trade (52 percent), military action (65 percent), climate change (83 percent), foreign aid (71 percent), energy supply (59 percent), and diplomatic relations (63 percent).

All of this is depressingly familiar, and more so when it represents yet another attempt by the Europhiliacs to by-pass the traditional standard of representative democracy – the popular vote in national elections – and to create a European polity by other means.

This is brought home by an interview of one of the organisers, Stephen Boucher from Notre Europe, who declares that, "Due to their recommending force," deliberative polls "can act as an incentives for politicians to take action." Such polls "could also help to bridge the gap between the EU institutions and its citizens, and increase acceptance for economic and social reforms."

In other words – reading the sub-text – this is but a device aimed at providing a veneer of legitimacy to EU actions, which were going to happen anyway, over which none of the "EU citizens" were allowed a vote (in case, of course, they say "no".)

Amazingly, Boucher concludes from the exercise that, if you pay the expenses of a carefully selected group to come to Brussels where you batter them for three days solid with your version of "balanced information", then it is possible, in your own terms, "to get them interested and better informed about complex policy matters, including the EU".

Only thus could you get them to agree that, "People want the EU to sort out its institutional difficulties before enlarging further," and that, "They accept the need for economic and social reforms, and want both their national governments and the EU to take action."

Viewed in isolation, this obviously lavishly funded exercise need not create any great alarm but, with the EU's incursions into the blogosphere and its funding of elements of "organised civil society" suggest a determined effort to dominate and control the public debate.

Quite how the Eurosceptic community should respond – if at all – is moot, but the signs are that the enemy is stepping up its activities and set to become even more formidable, as it challenges still further the very fundamentals of our democracy.