Get it over and done with! 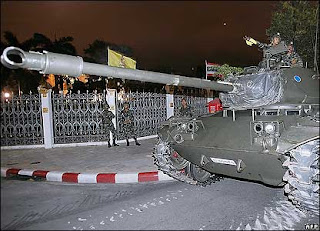 On the eve of the IGC summit, the "colleagues" may be on the brink of pulling off the most audacious bloodless coup in the history of Europe, if not mankind. But, they are leaving the peoples of the member states behind.

According to an FT/Harris poll, an overwhelming majority of people in Britain and four other big European Union countries want a referendum on the treaty. Some 70 percent of those questioned in the UK, France, Germany, Italy and Spain want one, 20 percent do not, and 10 percent are unsure.

Breaking it down by nationality, 76 percent of Germans, 75 percent of Britons, 72 percent of Italians, 65 percent of Spaniards and 63 percent of French are calling for the poll, a call which so far has been studiously ignored by their respective leaders.

The Financial Times notes that some politicians have warned that, by avoiding referendums and making the treaty a complicated document that amends earlier EU treaties, the EU “will reinforce the idea among European citizens that European construction is a mechanism organised behind their backs by jurists and diplomats”.

The paper cites Valéry Giscard d'Estaing and comments that the survey shows that, in spite of Britain’s opt-outs, public opinion in the UK is much more critical of the treaty than elsewhere. Overall, 38 percent say the treaty will have a positive impact on the EU and 23 percent a negative impact, with 14 percent foreseeing no impact and 25 percent unsure.

All this, however, has to be tempered by the finding that there is "widespread ignorance" about the treaty, with 61 percent saying they are "not at all familiar" with it, 34 percent claiming they are "somewhat familiar", three percent describing themselves as "very familiar" and one percent "extremely familiar".

Meanwhile, The Times, amongst others, have reported on a letter sent by Gordon Brown to Portuguese prime minister José Socrates – with copies to all the other member state leaders - saying leaders must concentrate on the well-being of the people of Europe, calling for an end to the "inward-looking institutional debate" over the new treaty.

The Times has interpreted this as Brown picking a fight with France to divert attention from referendum, as the text advocates the EU promoting free trade and openness. This is seen as "a direct challenge to Mr Sarkozy's attempt at the June summit to move to a more protectionist Europe." Interestingly, The Guardian sees the letter in exactly the same light, remarking that it, "...was clearly intended to shift the focus of the two-day summit from the domestic controversy over the new EU treaty and Mr Brown's refusal to offer Britons a referendum on the issue."

For anyone who wants to read the full text of the letter, it is here, on the Sky News site. Filled with the usual platitudinous FCO garbage though, it is hardly worth a second glance and, if Brown thinks at this late stage he is going to divert attention with another of his little games, he has been ill-advised.

Never has the summitry game-playing been more transparent and so oft-repeated has been the diversion ploy been that we are all bored with it. Since he is going to do it anyway, he needs to spare us the theatricals and get the damn thing over and done with. The reckoning can come later.