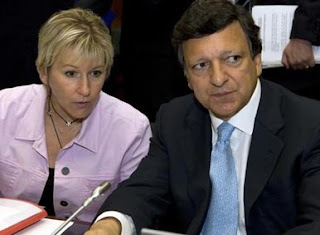 With uncommon speed, EU communications kommisar Margot Wallström (seen here with her boss at the summit) celebrates the agreement of the Lisbon treaty on her clog, warbling in her classic "fluffy" style that:

The setting was beautful (sic) – 25 degrees and a view of the sea from the rather space age building. The atmosphere between the Heads of State was good, I got the impression from the beginning that any fears this might turn into another Nice (3 days and nights of negotations (sic)) were unfounded. Everyone seemed determined to stick to the deal made last June – i.e. finally put the wrangling over Institutions behind us so that we can get down to the real business of the EU: implementing policies that people want.

Such is the self-deception inherent in our ruling classes that they have managed to convince themselves that they are responding to what "people want", a conviction which remains with them only by dint of them ensuring that the "people" are never given an opportunity freely to express their opinions.

The delusion carries through into the official enemy website, which has now devoted a specific section to the so-called "reform" treaty. It tells us that the main objectives of the treaty are to make the EU:

This Orwellian "newspeak" is possibly the most alarming of all the extrusions from the enemy as, the further they distance themselves from the reality of what is democracy, the more they prattle about bringing democracy to their construct.

There are enough "useful idiots" out there, however, to repeat this endless prattle, to the extent that they confuse the issue. However, if anyone has any doubts, just re-read Daniel Hannan's briefings on the subject. He writes:

Democracy works within units whose citizens feel enough in common with each other to accept government from each other’s hands: that is, within nations. That is why the idea of representative government developed hand-in-hand with the idea of self-determination. A state can be a supra-national federation, or it can be an accountable democracy; it cannot be both. … Take the demos out of democracy and you are left only with the kratos: the power of a system that, unable to appeal to civic patriotism, must compel obedience by force of law. That is the true betrayal of Europe's patrimony.

Whatever the prattle, there is no European demos, the European Union does not represent us and it is not therefore, and can never be, democratic.