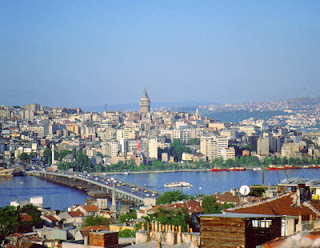 Yes, yes, I expect most of our readers have assumed that I have finally retreated and allowed the North world domination to take place. Not so but far from it.

I am merely investigating for my own benefit whether Turkey is likely to suffer the fate that has befallen many of us, that is membership of the European Union. I must admit, this does not appear to be much of an issue in Istanbul but I may simply be missing out something.

However, there are obviously some things one cannot help noticing in Istanbul, once known as Constantinople (given the number of Russians there are here, I wonder whether they have taken it, after all) and before that as Byzantium.

There is no question about the city being that exciting thing, the capital of an empire if only in the past. No city ever lives that down. If you don't believe me, spend some time wandering round Rome.

But Istanbul is the most astonishing mixture of pomp and splendour and dilapidated squalor. It reminds me quite uncannily of Eastern Europe of some decades ago. In fact, some East European cities are still similar but the one I knew best is nowadays in fine fettle. Istanbul may get there, too.

What can I say that might interest our readers? There are far fewer veiled ladies here than in Shepherds Bush, though even there the numbers are going down. But Turkish ladies of varying ages do tend to wear very lovely bright headscarves, far prettier than the headscarves as worn by Mrs Mop of the forties and fifties. Many of them are very very chic and I am trying to work out how they achieve that effect.

I have hopes as several people have spoken to me in Turkish. Clearly I do not look that different.

The biggest surprise are the street cats and dogs - all in excellent condition, well fed, well looked after but clearly of no particular address. A couple of cats wandered inside the Haghia Sophia, playing with visitors, posing for photographs and generally adding to the atmosphere.

The Blue Mosque is beautiful but the New Mosque (1572) is much finer. And yes, there is a photograph of me in a headscarf inside the Blue Mosque, which shall be posted as soon as I am back in London to annoy numerous readers. Heh!

The food is excellent, the people are friendly, the Bosphorus is spectacular, hardly anyone reads newspapers and the only time people seemed to watching TV was when Turkey played Moldova at football. And there are no pictures of the following: Princess Di, Victoria Beckham, the McCanns or the Macartneys. The many pictures of Mustafa Kemal is a small price to pay for that relief.

I wonder if anybody here needs an advisor on EU affairs.
Posted by Helen at 13:09