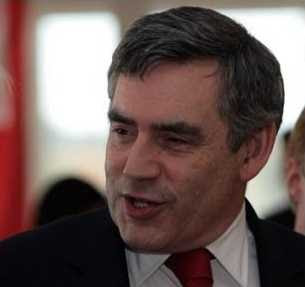 There is still some argument about the precise date on which it happened. Some assert that it was 18 October 2007, when prime minister Brown (see archive photograph, left – believed to be taken about that time) agreed in principle to what became known as the "Lisbon Treaty" – once the pretence that it was a "reform" treaty was no longer necessary.

Others suggest that it was the following day, when Brown initialled the communiqué giving his assent to the treaty, following down the path set for him on 18 June 2007 when his predecessor, Mr Tony Blair, agreed on the "mandate" which led to the treaty.

Some declare that it was on the day in December when Brown formally signed the new treaty and still others maintain that it took effect from the day when the amendment to the European Communities Act was given Royal Assent, placing the treaty formally on the statute book of the United Kingdom and thus embedding it as part of its constitution.

But, to a man – and the occasional woman – all agree that, whatever day it was, it was the last time the once-proud nation which called itself the United Kingdom had its own independent government. Mr Brown was the last prime minister of the last British government.

Many learned treatises have been written about how this came to pass, but one and all marvel about how this great event happened with barely anyone noticing – not the prattling claque of journalists, not the posturing politicians and certainly not the self-appointed "campaigning groups", one of which spent the time during the IGC summit vainly trying to inflate a giant replica ballot box (this seems incredible, but it is well-sourced in the contemporary media - ed).

The general consensus, however, is that there were a number of key factors – the relative importance of which is still disputed. The first – not in any agreed order of importance – is the stunning ignorance of the media, the political classes and the population in general, of the nature of and structure of what was to become their new government, the European Union.

And, not understanding what they were dealing with, they failed completely to understand the significance of the changes the treaty brought. Indeed, some maintained that they had no meaning.

Secondly, it is agreed that a significant factor was the almost lemming-like willingness of all involved to chase after what was then described as "red herrings" (if lemmings ever chased after anything) – the willingness to allow the debate to be channelled into peripheral issues which tended to conceal rather than illuminate the magnitude of the changes being proposed.

A third issue was the singular fact that so few of those who campaigned against the treaty were actually dedicated to that cause. Some organisations – like the Conservatives (one of the British political parties, before national parties were abolished - ed) - saw in the treaty an opportunity to pursue their own partisan interests, and therefore neglected to focus on the danger that was confronting them.

But the fourth element - unanimously acclaimed as of central importance – was the integrationalists' creative use of language. One such was their resort to the label "reform" as an appendage to the treaty title, thus conveying the impression that it was of no fundamental significance.

They also, quite deliberately, confused the meaning of the word "constitution" to such an extent that few realised that this, like all the other treaties which had gone before, was indeed a constitutional treaty, adding yet more provisions to a document of ever-increasing scope and size.

However, the greatest – if Machiavellian - cleverness was disguising the fact that they were creating not a "super state", as many had claimed, but a "super government". This was done by the expedient of using the anodyne word "institutions" as a substitute for the term "governmental structures". By this simple device, only a few realised that the treaty was introducing the near final stages of a supreme government of Europe. (There was only the elected president to come, and that was to take several decades more - ed).

The deception was aided by the refusal of journalists and others to embrace the terminology of the new government, and their tendency to avoid describing the supreme body by its correct title of "European Council". Instead, most often, they referred to it as a "summit", as if it was a meeting of independent heads of states and government - in which its origin lay.

Hidden in plain sight, they failed to realise the subtle but important changes that brought it into the legal maw of the Union as a fully-fledged institution, subject to its rules of procedure and laws.

Although this now seems as arcane and perverse as describing the cabinet meetings of the former British government as a "summit", the practice persisted for many years after the treaty had taken effect, until it became generally recognised that the centre of power did rest in the European canton of Brussels, and that all important decisions emanated from there.

Many parallels have since been drawn between this bloodless coup d'état and the take-over by Hitler of the German government in 1932, but most authorities accept that the process by which the governments of 27 formerly independent European states were taken over was unique.

However, it has been agreed that this was yet another example of the "big lie" – an event (or a process) of such magnitude and daring that no one could or would believe it was happening. Even many of those who were intimately involved in the process never properly realised what was happening until after the event.

And so it was that the European Union came formally into being as the central government of the 27 member states, relegating each of those states to the status of local, subordinate provinces, with the ingenious and largely novel device, whereby the supreme ruling European Council comprised the provincial governors, thus fostering the illusion that the former states had retained their independent governments.

In an inspired additional deception, the former national parliaments and assemblies were left in place, to allow locally elected "representatives" to debate laws they were not allowed to change, a practice which strengthened that illusion.

Even many decades after the event, it is too early to say what the final outcome of this daring power-grab will be. It is interesting to note, however, that the European Council has again this year increased the budget of EUROGENDFOR and authorised an expansion in its establishment to 1.5 million men.

Local authorities throughout the Union, who are struggling with the rising tide of unrest and armed uprisings, will be glad to have the additional assistance.