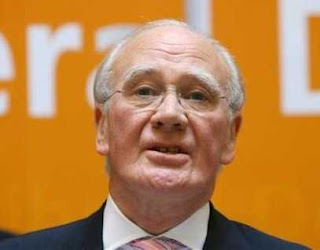 If we were of a mind, we could so easily attribute base motives to Lib-Dim (ex) leader, Ming Campbell in the timing of his resignation – calculated to dominate political comment for the next few days and thus drown out discussion on the IGC.

It is, of course, a coincidence, just as Blair's resignation after the June European Council and the Brown accession curtailed detailed discussion of the mandate. All one can say, therefore, is that in its progress through the system, this draft treaty has had a charmed life.

It is no surprise, therefore, that – from one of the few detailed reports we can find of yesterday's proceedings in Luxembourg - officials were "confident" that the forthcoming IGC summit with "put an end to two years of angst" over the EU’s constitution.

We learn that, "still to be sorted out" are changes Poland wants to the voting rules, Italy's unhappiness with the allocation of European Parliament seats, and a cap on foreign students sought by Austria. Another last-minute hurdle is a tug-of-war between Bulgaria and the EU over the spelling of the word "euro" in the Cyrillic alphabet.

Nevertheless, Manuel Lobo Antunes, European affairs minister for Portugal, is chipper, declaring that, "Our confidence is now greater than before … There is a firm political will that we should conclude this in Lisbon."

Merkel and Barroso, likewise, express confidence of success. Says Barroso, "We will do utmost to reach a deal," while Merkel adds: "There is no reason, no excuse, not to come to an agreement." Her political flunky echoes this. Says German foreign minister Frank-Walter Steinmeier. "Everybody is optimistic that this ambitious project will not fail."

So, it is all a done deal … all but the theatre. And, as the "colleagues" stitch us up, the British media goes into hyperdrive over Ming. Perhaps it wasn't a coincidence… Nah!