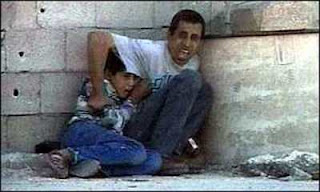 One can sympathize with Nidra Poller of Pajamas Media who says:

Ainit the truth! You work on a story for years, and the day you oversleep your mailbox spills over with breaking news. “Al Dura death was staged. It’s official.” Everybody and his brother gleefully informed me of the breaking news.

It’s all right for us. We may have been following the story on this blog for some time but there is no particular danger of the British MSM picking up the story. Far too much like real news.

Anyway, the big story is that Israel is fighting back on the propaganda front as well as in the shooting war. For the first time Israel has denied officially that it was responsible for the death of little Mohammed Al-Dura whose life and death has been called into doubt by a number of commentators.

The document argued that the images, which showed al-Dura being shot beside his father and have become a symbol of the second intifada, were staged.

"The creation of the myth of Muhammad al-Dura has caused great damage to the State of Israel. This is an explicit blood libel against the state. And just as blood libels in the old days have led to pogroms, this one has also caused damage and dozens of dead," said Government Press Office director Daniel Seaman.

The arguments were based on investigations that showed that the angles of the IDF troops' fire could not have hit the child or his father, that part of the filmed material, mainly the moment of the boy's alleged death, is missing, and the fact that the cameraman can be heard saying the boy is dead while the boy is still seen moving.

As we have said before on occasions too numerous to mention or refer to we are not fighting just a shooting war. Actually, when you think about it, not big war is just a shooting war. There was a good deal of propaganda in those religious wars in the sixteenth and seventeenth centuries, in the wars against Revolutionary and Napoleonic France, in the two World Wars of the twentieth century and in the Cold War.

If we do not win the propaganda war we may as well not bother with the shooting one.