It is not that EU commission officials are stupid – far from it. There are some very bright cookies working in Brussels. It's just that their brains are wired differently. And these cross-wires are at it again.

This time, via the Bloomberg news agency, we learn that the EU "Wants Carmakers to Add Brake Technology for Safety".

This is extra braking technology, known as "brake assist", a sensor-actuated system installed in cars which triggers extra braking power when the driver pushes the brake pedal in an emergency. And the EU commission is proposing that this technology should be fitted to all new cars from 2009 adding, incidentally, about £60 to the cost of production.

Burbles industry commissioner Guenter Verheugen (why him and not Barrot?), "this proposal is good and important for the safety of all road users, especially vulnerable groups like pedestrians and cyclists."

What the man (and his officials) fail to understand is that "safety" enhancements to vehicles do not automatically lead to overall improvements in road safety. In fact – as we pointed out in an earlier post, they can lead to increased injuries and death.

The main problem is psychological, in that drivers have an inherent tolerance of risk (the so-called "risk thermostat") and, therefore, if you increase the "safety" of the vehicle they are driving, they absorb the additional margin by increasing risk taking. Thus, you can expect that drivers in cars fitted with this technology will travel faster, knowing the system will bring them to a halt quicker, will leave braking later and will be more likely to tail-gate.

Further, with just some cars thus fitted, you can expect an increase in tail-shunt accidents as some cars are able to stop quicker than others – exactly what happened when ABS was introduced (and still happens).

But, all it takes is the EU to utter the mantra "road safety" and quote spurious statistics on how many lives will be "saved" (in this case a notional 1,1000 pedestrian a year) and the member states (backed by a strong lobby of motor manufacturers) will roll over and pass this latest piece of idiocy into law. 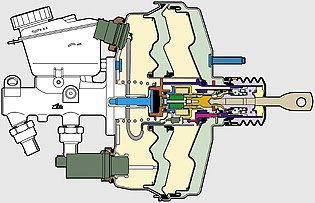 Never mind that, as the technology increases, so does the cost, the weight (itself a killer), the complexity (illustrated) and the number of things that can go wrong.

However, Sigrid de Vries, spokeswoman of the European Automobile Manufacturers Association in Brussels, sums up the mindset. "Safety is one of our priorities," she purrs – no doubt having worked out the additional income that will accrue from yet another expensive add-on to the collective car fleet.

And that possibly explains why industry commissioner Verheugen – rather than transport commissioner Barrot – made the announcement. When push comes to shove, the real agenda is money.