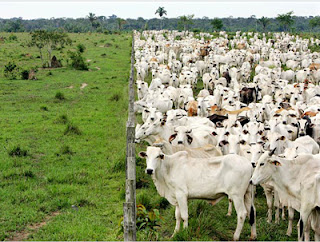 As British livestock farmers struggle under the combined burden of foot and mouth and blue tongue disease controls, to say nothing of the "hidden epidemic" of bovine TB, a long-running controversy about the standards of Brazilian beef goes almost unnoticed and unreported in the MSM – marked only in the specialist press and in some local newspapers.

Yet nothing more shows the inconsistency of the EU commission, and its willingness to permit double standards, which harm both domestic producers and show the EU to be a totally bankrupt form of government.

However, the latest instalment of the controversy emerges in the Tipperary paper, the Nenagh Guardian, which reports on accusations that not only is the EU commission permitting double standards but that the Irish agriculture minister is aiding and abetting the European Commission bureaucrats in a "cover-up".

The issue rests on the burden of regulation affecting beef producers in EU member states – the two biggest being the Irish Republic and the UK – who must document their cattle from "cradle to grave" and keep detailed records of every single movement, on pain of draconian penalties.

Yet, while agriculture ministers and the commission have gone on record stating that cattle from which meat is imported must conform with the same standards, in September 2005, the EU's inspection agency, the Food and Veterinary Office (FVO), visited Brazil and found an absence of animal identification and adherence to basic rules. It also found that deficiencies relating to the control of food and mouth disease, found in 2003, had not been rectified and, to this day, there have been no improvements.

Because of the shortfalls in animal health controls, five major countries, including Australia, the USA and New Zealand have banned imports of Brazilian beef - but not the EU, despite guarantees of equivalency provided for in Community legislation. In fact, the commission seems entirely content that animals of unknown origin are eligible for import into Europe after only six weeks residency on the dispatch farm – something which would not be permitted of farmers in EU member states.

The final irony is that – as many will recall – the current EU controls on livestock originated in the health scares of late 1990s, pushed by massive media pressure. Yet, when the EU so singularly fails to enforce those same standards on imported beef, the media are silent.

This should be a major scandal but – as with so many things that the EU fails to do – the media give it an easy ride and turn the other way.

Email ThisBlogThis!Share to TwitterShare to FacebookShare to Pinterest
Labels: Australia